We landed in Las Vegas late on a Saturday evening and were greeted by companions Nicholas and Lael – something more than complete strangers – outside the airport. Together we built bikes and rolled an hour through city to the abrupt edge of the desert. A few hundred meters from the last buildings we unrolled our sleeping bags, some time after 1AM.

Though we hadn’t any real plans with them, our shared route toward the northern terminus of the Arizona Trail had us forming a sort of allegiance of independent nations that lasted a week. These days of mid-day Miller High Life, Interstate shoulders and city park bivouacs was more approach than experience and, but for the cold beer and good company, Panthea and I suffered from relatively low enthusiasm for most of it. Joining the trail near the Utah-Arizona border, chaffed and grumpy from too much high speed shoulderless highway riding, was the relief we’d been waiting for and we intended to savour it. Our allies, in their equal excitement, seemed in a hurry to enjoy as much singletrack as possible each day. A stick jumped into my spoke, I hit a tree, and a half-hour of rolling, groaning back spasms ensured our second morning on the trail would be our last sighting of those indomitable speedsters. 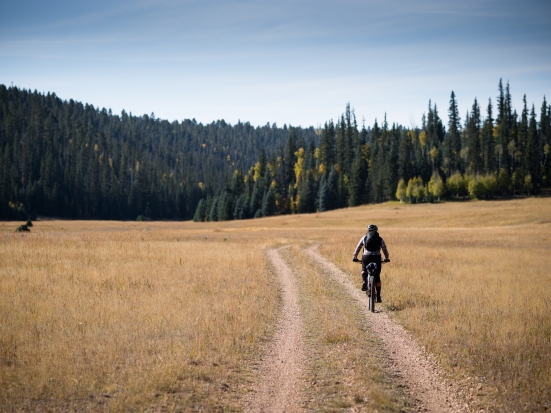 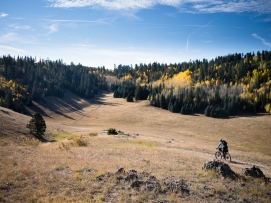 At the outset of our trip on the Arizona Trail, I’d mentioned to Panthea that a few options existed for getting across one of North America’s biggest obstacles. The Grand Canyon could be avoided on a 200 mile highway detour, or crossed on a steep footpath. For the latter option, I explained it was possible to ship bikes around in the shuttle bus used by rim-to-rim hikers. Later, as we approached the canyon, I asked whether we should ride around or ship our bikes around. Panthea replied, “I thought we were carrying them across the canyon!”

“Oh. I guess we’ll do that then.” Besides, it sounded bad-ass. Scott and Eszter did it. Nick and Lael were doing it. 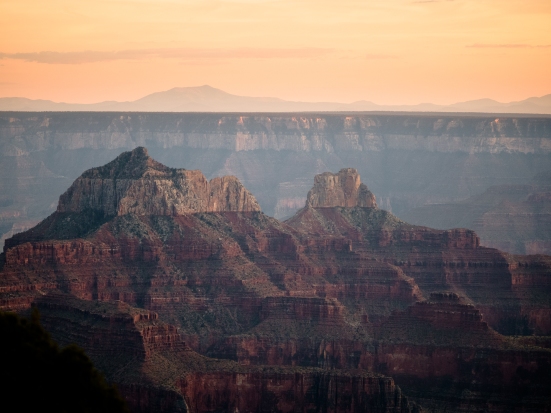 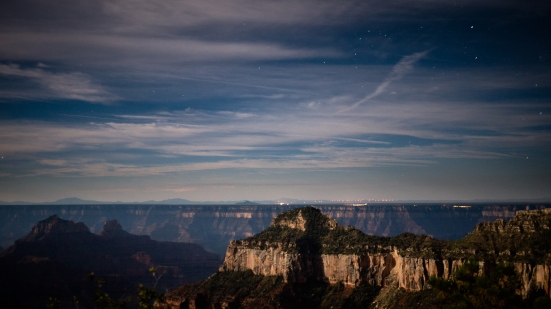 We bought ratchet tie-down straps at a gas station in Fredonia, abandoned the ratcheting part, and built backpack straps out of the lengths of 1″ nylon webbing. My heavily padded fannypack took the job of waist belt, and Panthea’s ultralight stowaway backpack pretended to offer more shoulder comfort than the 1″ webbing. This might sounds like a good, creative solution, but it was actually terrible. 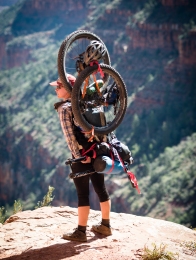 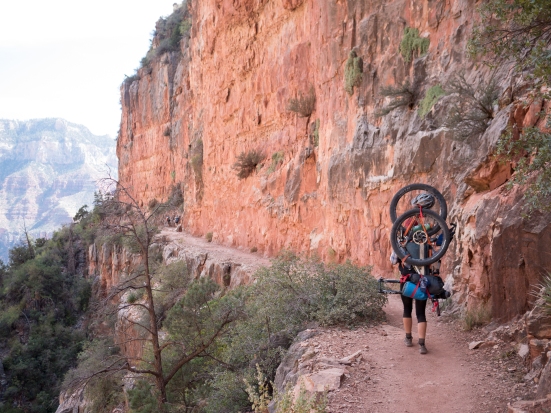 Perhaps worse than the brutality of carrying 60lbs of bike and camping gear over 1800m down a canyon, and another 1500m back up over 40km, were the endless repeating comments of flabbergasted tourists on the trail.

“IS THERE GOOD RIDIN’ DOWN THERE, PARDNER?”

“No riding allowed until the other rim, actually.”

“WHAT?! Wait! You’re just carrying those things UP THE OTHER SIDE?”

“Yes. We are idiots. And no, this is not the first time we’ve done something this stupid.”

In the face of such interrogation, an inflated ego is maybe weightier than a fat-tired bikepacking steed. The sensible choice, the bicycle shuttle service, requires only $65 and an ounce of humility. Free of the angry monkeys on our backs, we could have enjoyed one of the world’s most scenic hikes with some dignity. 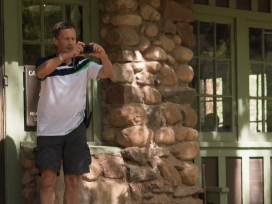 It took two days to reach the South Rim. We arrived unable to bend our legs, and could barely walk for several days afterwards. Still, none were more desperate than the final 5 miles. You see, the bottom of the canyon is a hellish inferno, an extremely dry 40 degrees centigrade. I had to consume an elephant’s ration of water to keep hydrated, and after two days, this fluid flux began to have a powerfully laxative effect.

Perhaps this is a natural response to high-flow fluid movement. Perhaps it is a hereditary reaction to the desert. My memory is imprinted with a scene from my first visit to the southwest on a family road trip in a station wagon with no AC: my father rinsing a deeply embarrassing desert sickness from the inside of his white sneakers at Utah’s Deadhorse State Park.

Either way, the final three rest stops were mercifully spaced 1.5 miles apart, saving me from embarrassment, encouraging a frenzied pace, and offering a potential explanation for the american habit of referring to toilets as restrooms. A bad ass indeed.

As much as we wanted to make it to Flagstaff in two more days to meet friends coming down from Vancouver, our sore jelly legs would not allow it. Instead, Marius picked us up 30 miles short of old Route 66. Together with Marius and Adriana, we planned to ride the Coconino Loop, and then continue back down the AZT once they returned north. A day into the loop, thunderstorms brought us to a slippy, sticky halt in peanut butter mud. The following day we pushed and slid our way through rain and mud to a motel room in Sedona. Already a day behind schedule – a schedule that mattered as Adriana and Marius have real jobs and set vacation dates – we decided to bail on the Cononino Loop in order to maximize our enjoyment of Sedona’s world-class mountain biking trails. 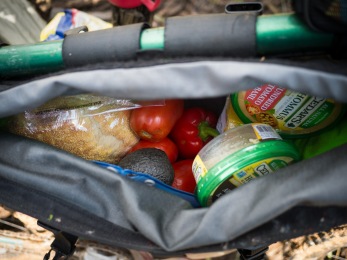 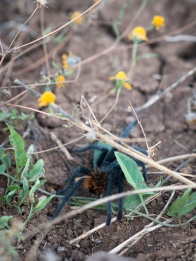 A barefoot couple relaxed with their barefoot, diaperless baby outside Whole Foods. Between rants about how western medicine was killing everyone, they held their child over the patio railing, so that it could unleash its torrent of baby diarrhea unfettered onto the landscaping. “If you eat dead things,” they reasoned, “you’ll be dead. If you eat living things, you’ll live.”

At the cashier someone exclaimed upon seeing the total of her bill that she’d go look up the significance of those numbers.

Back on the patio, a woman who proudly subsisted on a diet of brown slurry that she drank from a half-gallon Mason jar explained that she’d been going through a phase of wild energy and “was basically tripping out all the time.” Her friend replied earnestly with a tragic story of a broken heart. They each told each other how good it felt to talk.

Further down the road, a Lakota man offers “authentic Karma cleansing” with shamanism imported from Mexico and Los Angeles.

a reckless sort of riding, well suited to Sedona.

Still, seemingly rare in Arizona, Sedona’s eclectic community is committed to the beauty of their place, and has worked hard to maintain trail access and keep urban sprawl in check. As a result, there are no garish signs or billboards, and camping is prohibited with 10 miles of the town (to keep out the riff-raff). Despite Sedona’s absurdisms and conspicuous white privilege, the riding was so good, the landscape so genuinely moving, that this rabble remained checked into our motel room for three more superb days of riding. 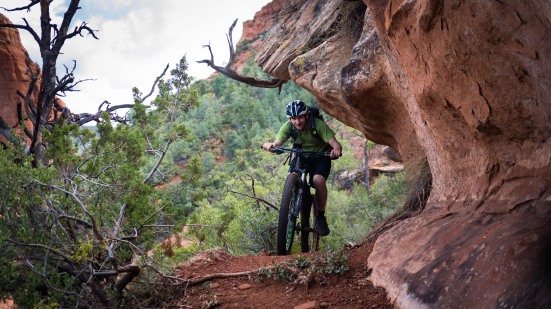 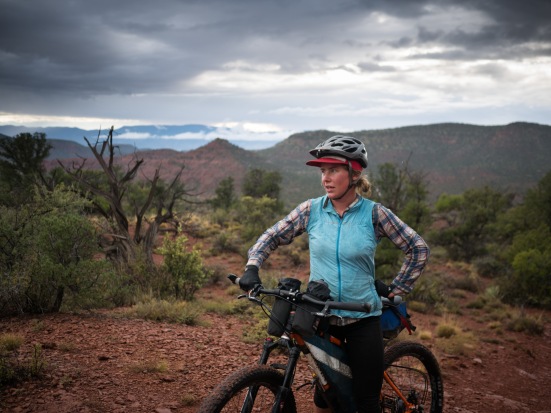 Remember to check out my previous post, Arizona Skies, for addition photos of Arizona. And, stay tuned for another report about our continuation through Arizona’s cactus-filled low desert. If you’d like to keep up to date with our travels in real time, as opposed to two months after the fact, as these posts tend to be, follow along on my Instagram account. We’re just beginning a several week long period of proper, old-fashioned employment, to afford more travelling in the new year, so you’ll have to forgive a few recycled photos, and documentation of work in northern Alberta’s forests.

2 thoughts on “Arizona – The High Desert”