On a late August afternoon, I rolled out my door into the summer heat. I loaded my bike onto a public bus, and took it to the farthest stop of Vancouver’s transit system – Mission, British Columbia. What started off feeling like a daily commute through the city was actually the beginning of a three week solo excursion following British Columbia’s biggest, highest, wildest mountain range.

When I first discovered cycle touring, some eight years ago, I recall reading a journal describing the ways to ride inland, out of the Lower Mainland. Highway 1 – A busy, windy highway with a reasonable shoulder. “The route of pure pleasure.”; Highway 5 – A huge climb while cars go by at mach speed; Highway 99, Sea to Sky Highway- Gorgeous views, constant climbing, terrible drivers, and rumble strips on the shoulder. “The scream and die highway”.

Well, I’d driven Highway 1 and could imagine all too well how horrible it would be to be blown off the road by speeding, exhaust spewing trucks and canyon winds, while my tires and face melted in the heat. After a few tours around the islands south and west of Vancouver, and an excellent trip to the Balkans, I mostly stopped cycle touring. Riding on busy or paved roads still fails to captivate me.

Meanwhile, a siren song floated down from unseen mountainscapes. I found my way into them on foot or touring skis. I learned to climb them. But, the draw has always been the mountains, the valleys, the folded and broken panoramas more than the summits. Bikepacking has again changed the way I look at a map. Armed with lightweight gear and a sturdy, if simplistic, mountain bike, the lines in the Backroads Mapbook created a continuous dirt route out of the urban sprawl of the Lower Mainland, along the edge of the Coast Mountains, through hundreds of kilometers of dramatic wildlands. It is never flat, and that’s the point. 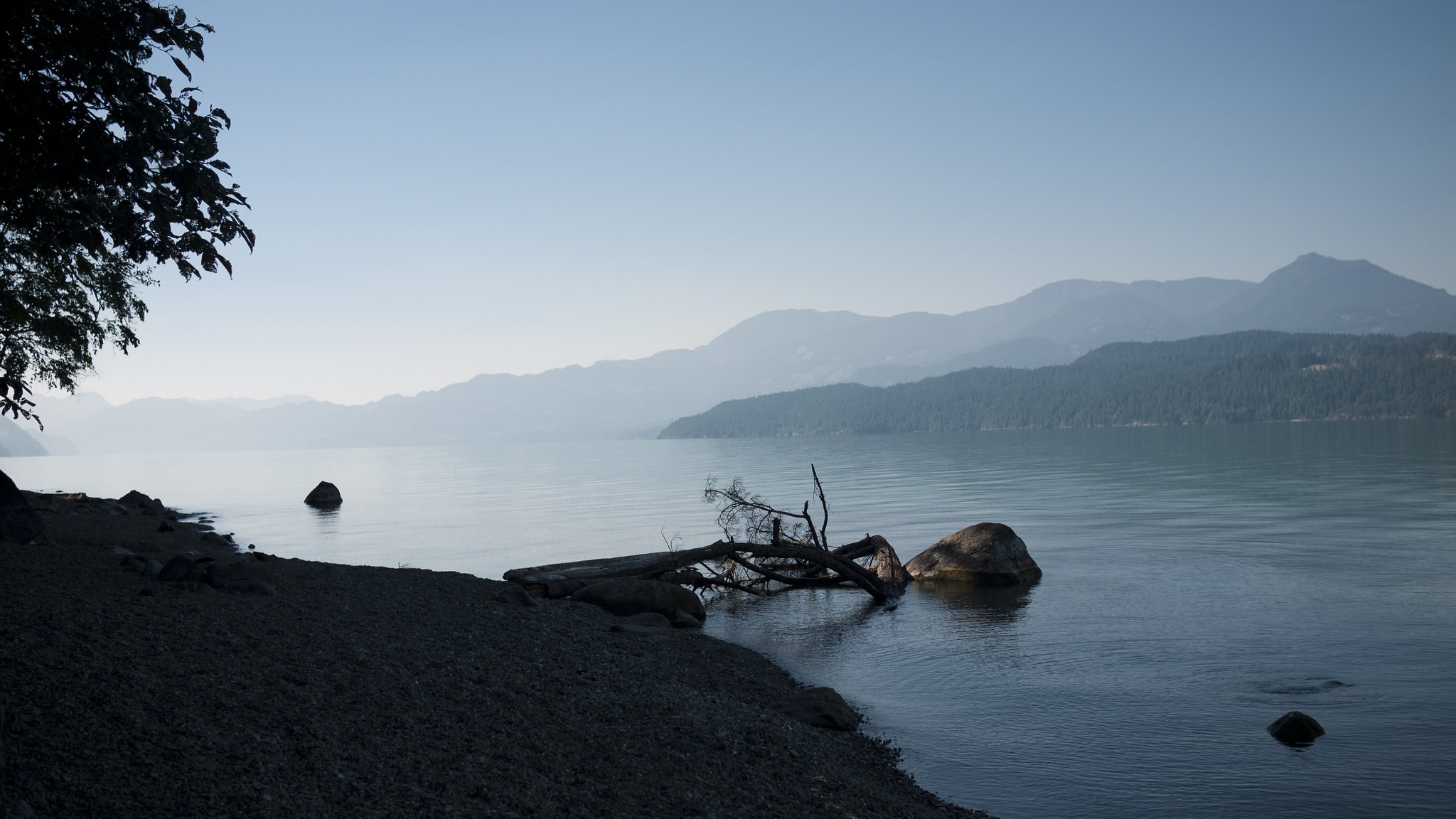 It took me an afternoon to reach Harrison Lake, where I spent my first night. 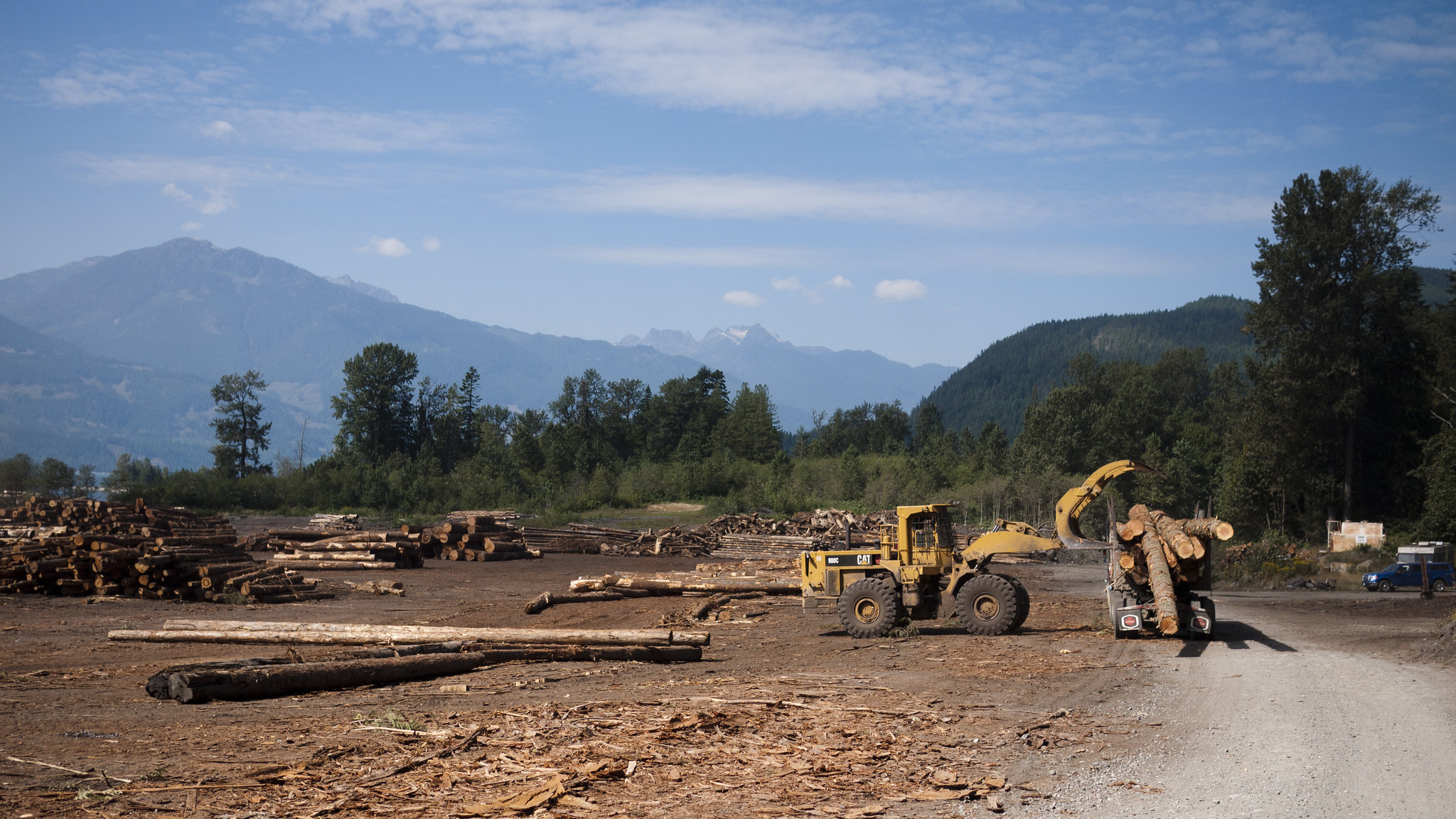 The transition out of the industrial landscape of the Lower mainland was gradual, but total. 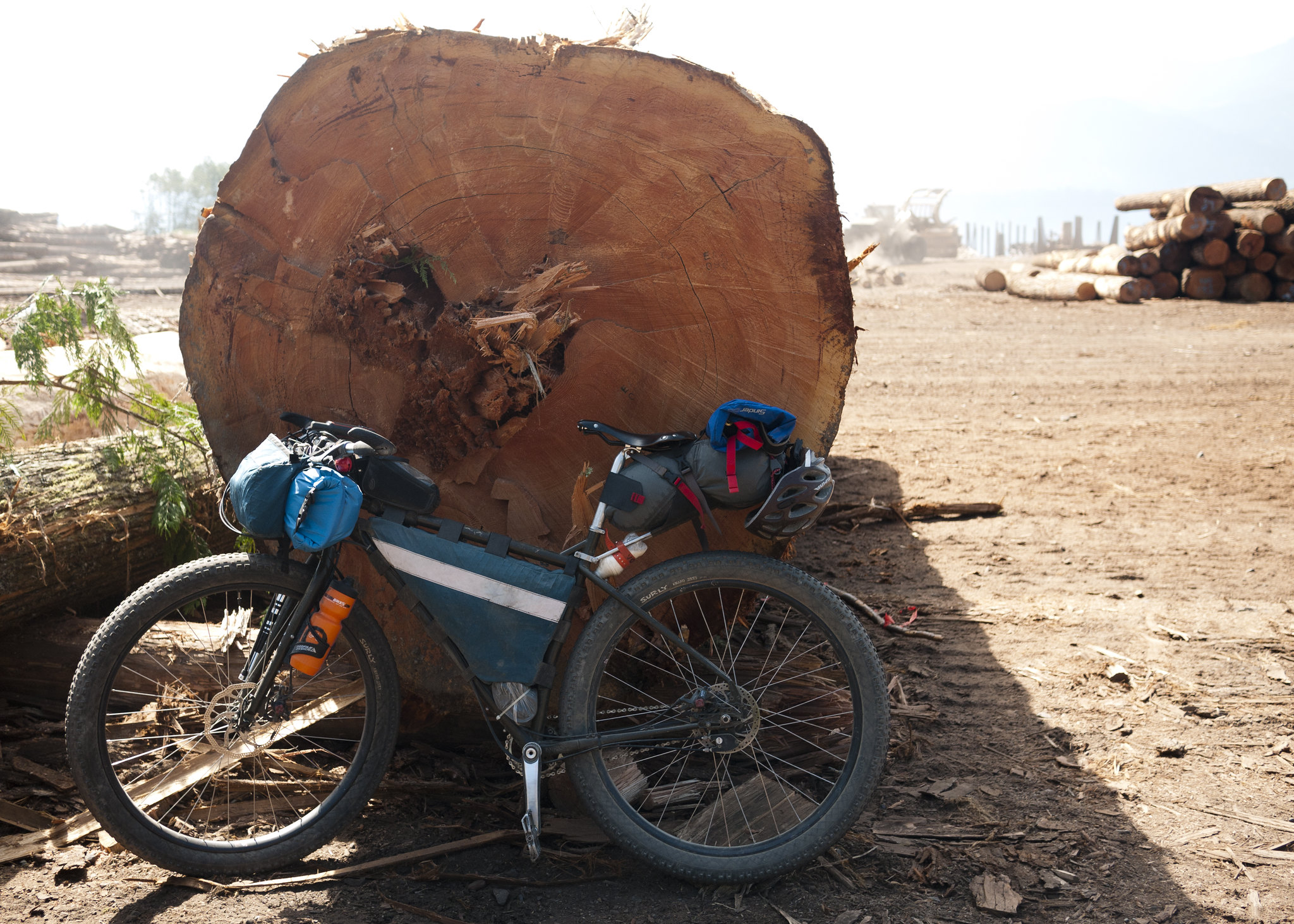 It seems they’re still mining old growth in BC. 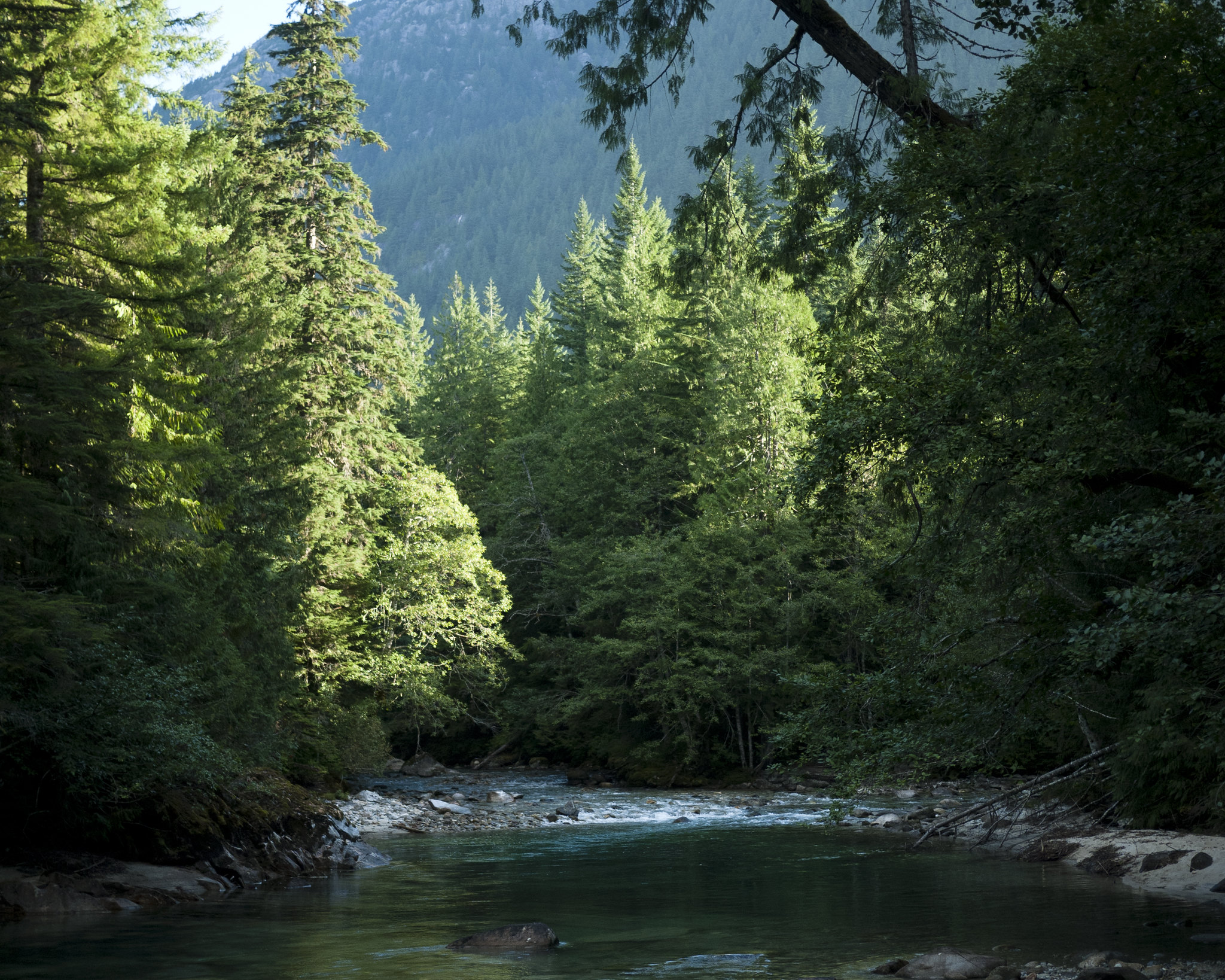 Past logging operations and through a hydroelectric construction site, I found a quiet camp spot beside Big Silver Creek. 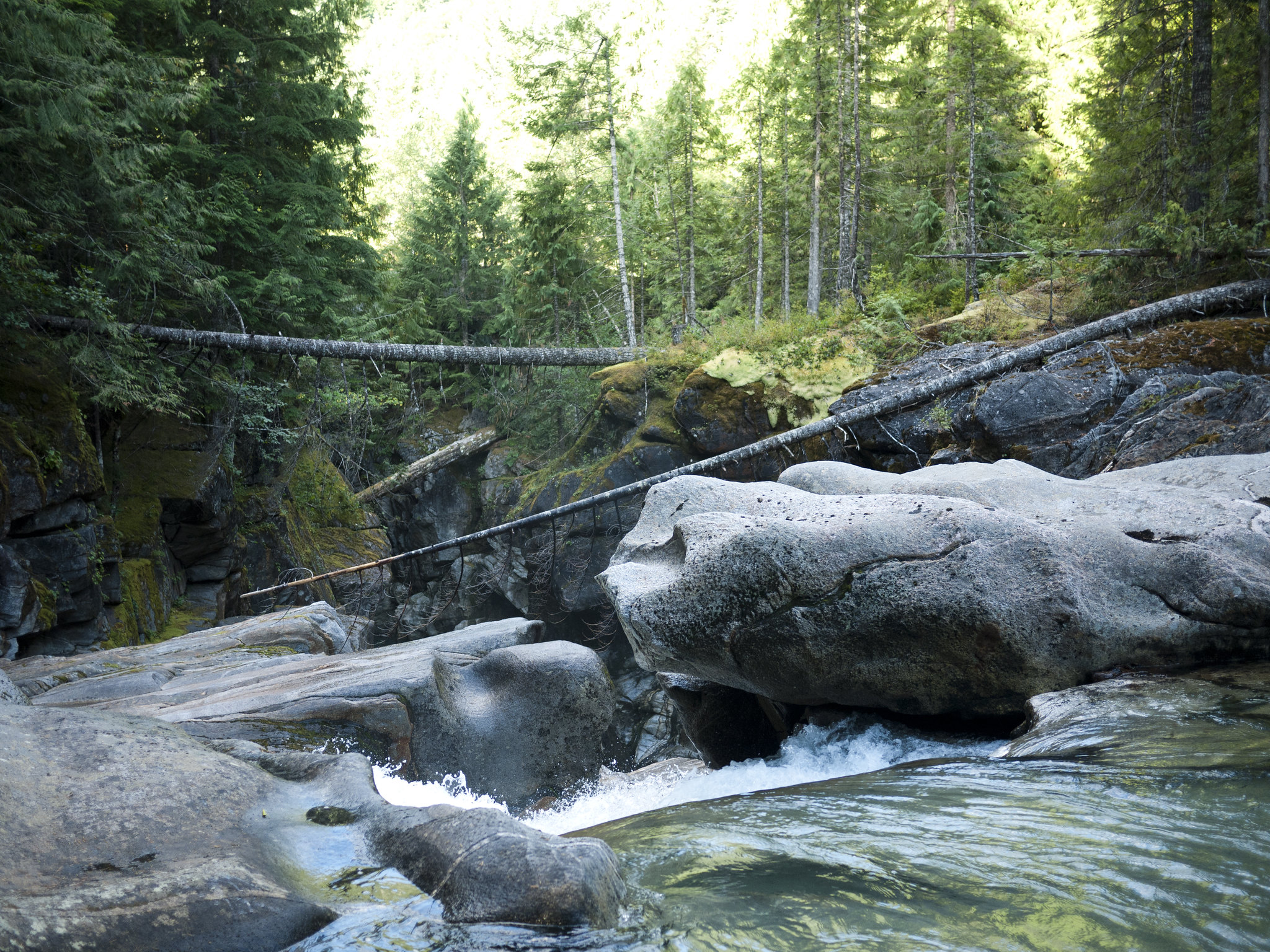 I bathed and rinsed the salt from my clothes above a waterfall. 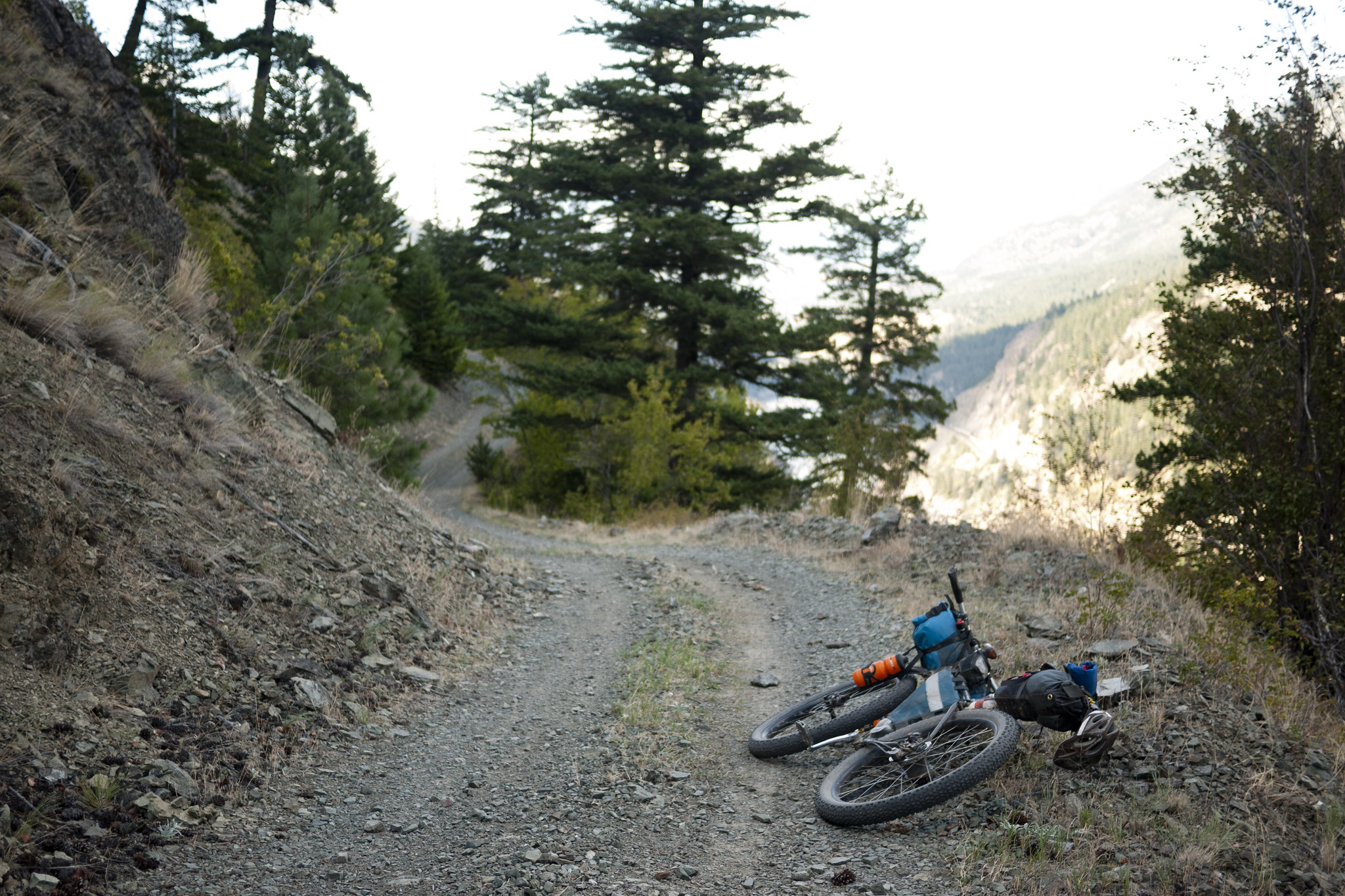 A big climb and descent over a 1200m pass took me through the transition from wet coastal forests down to the dry Fraser Canyon via the Nahatlatch River valley. 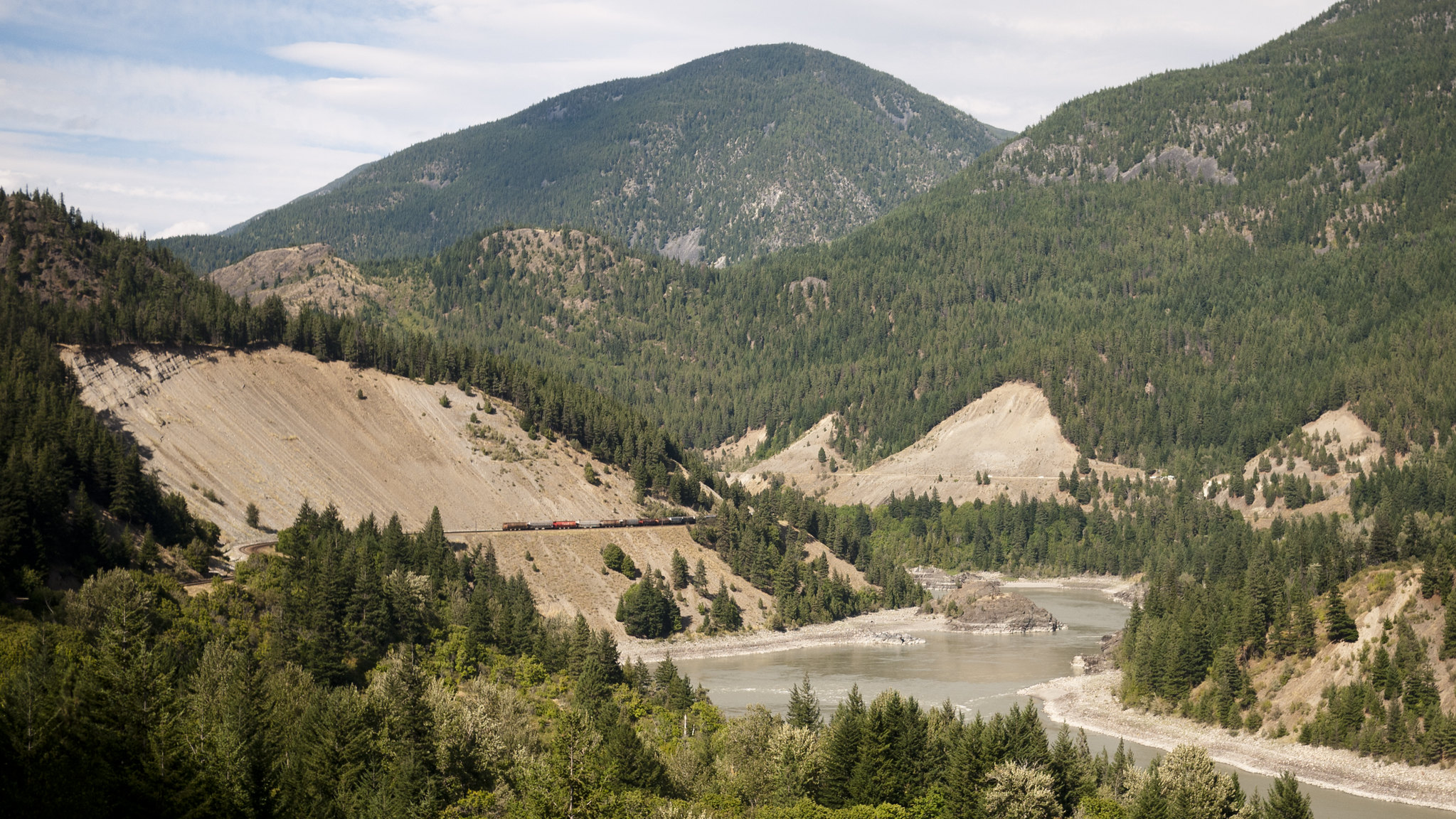 I followed a dirt track along the west side of the mighty Fraser River, opposite Highway 1. 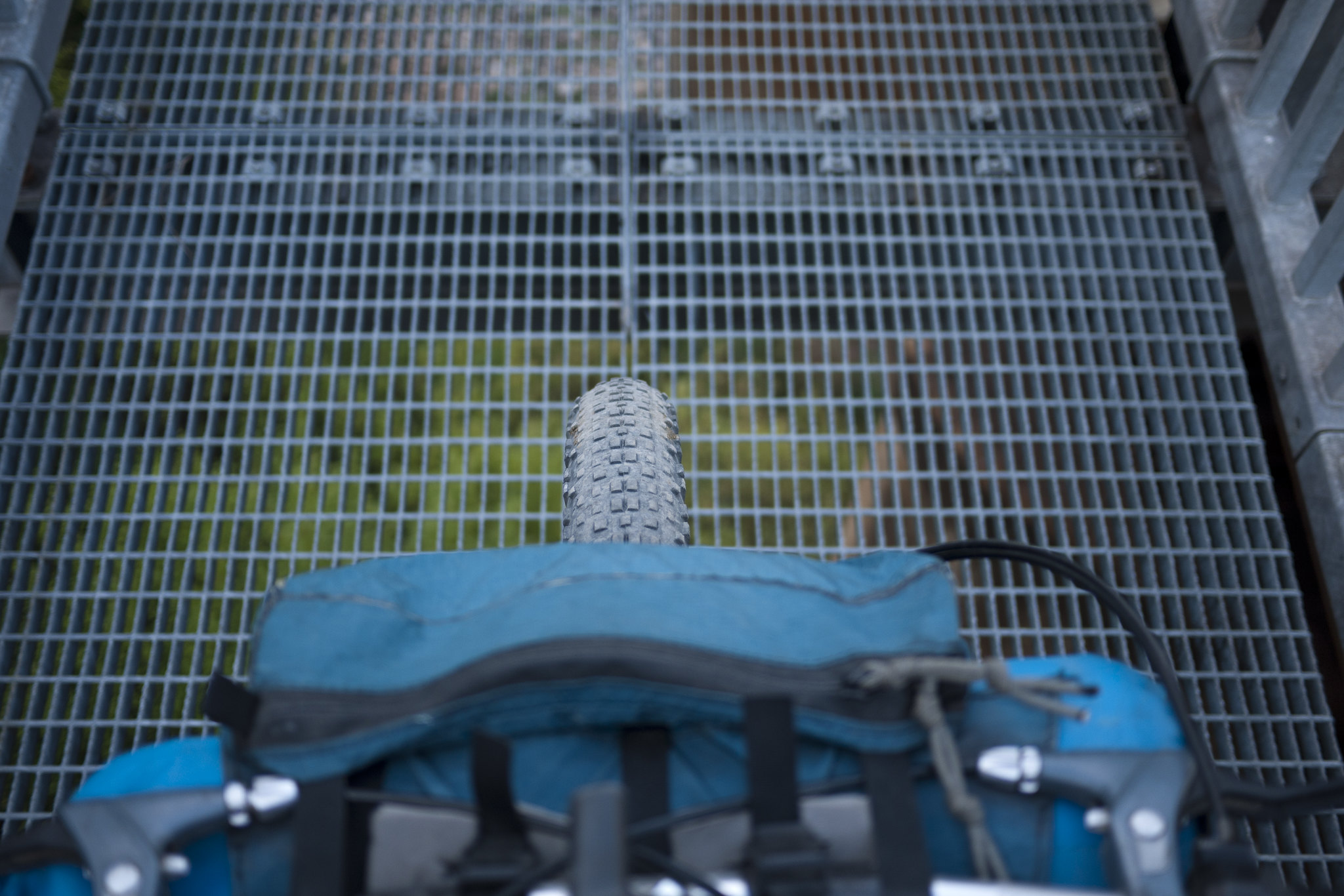 Eventually, a walkway connected to a rail bridge brought me over the Fraser to Lytton, where I could resupply. 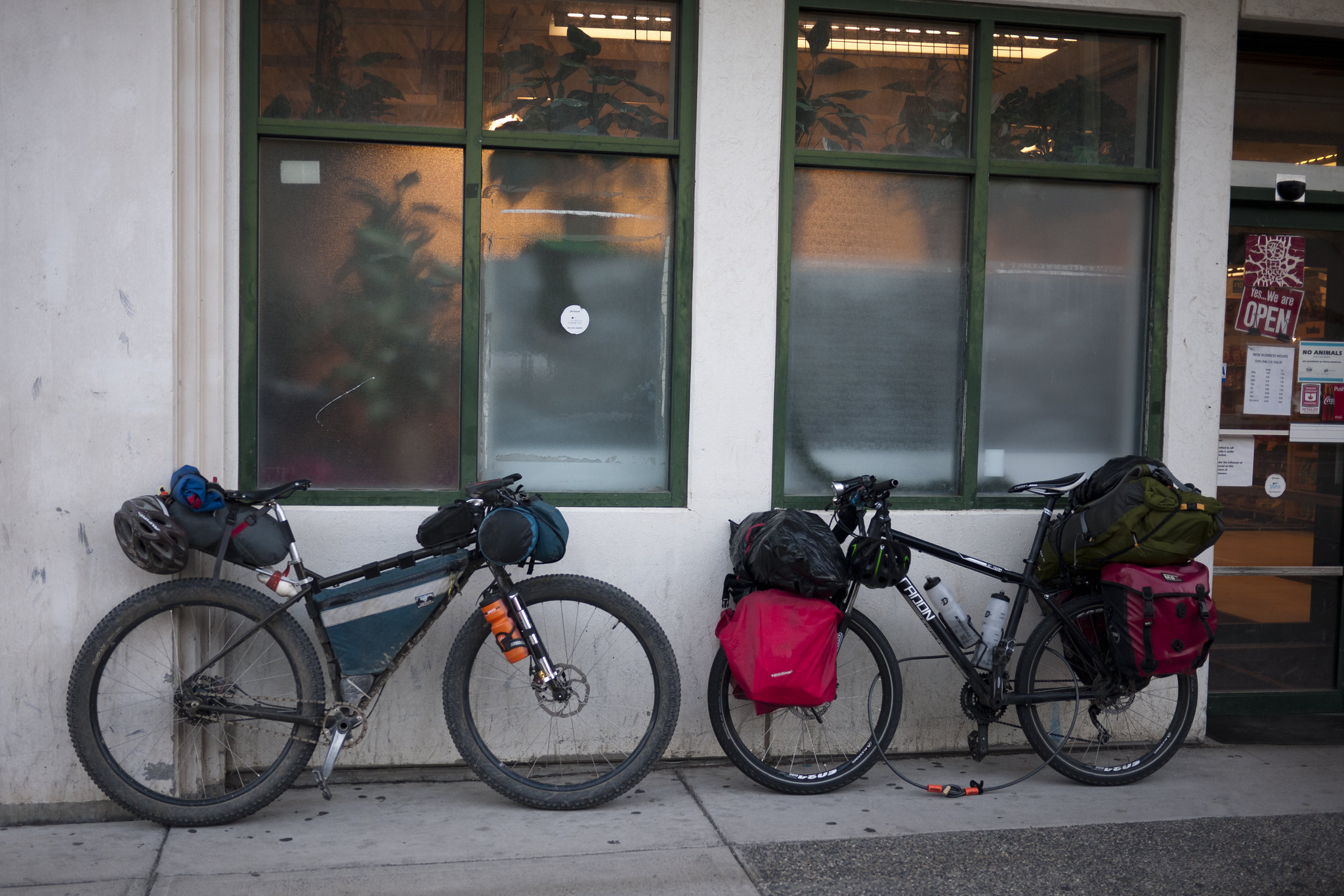 Here, I met an overloaded German cyclist coming from Alaska. Bonding over bicycles, we made plans to camp together, back on the quiet side of the Fraser. 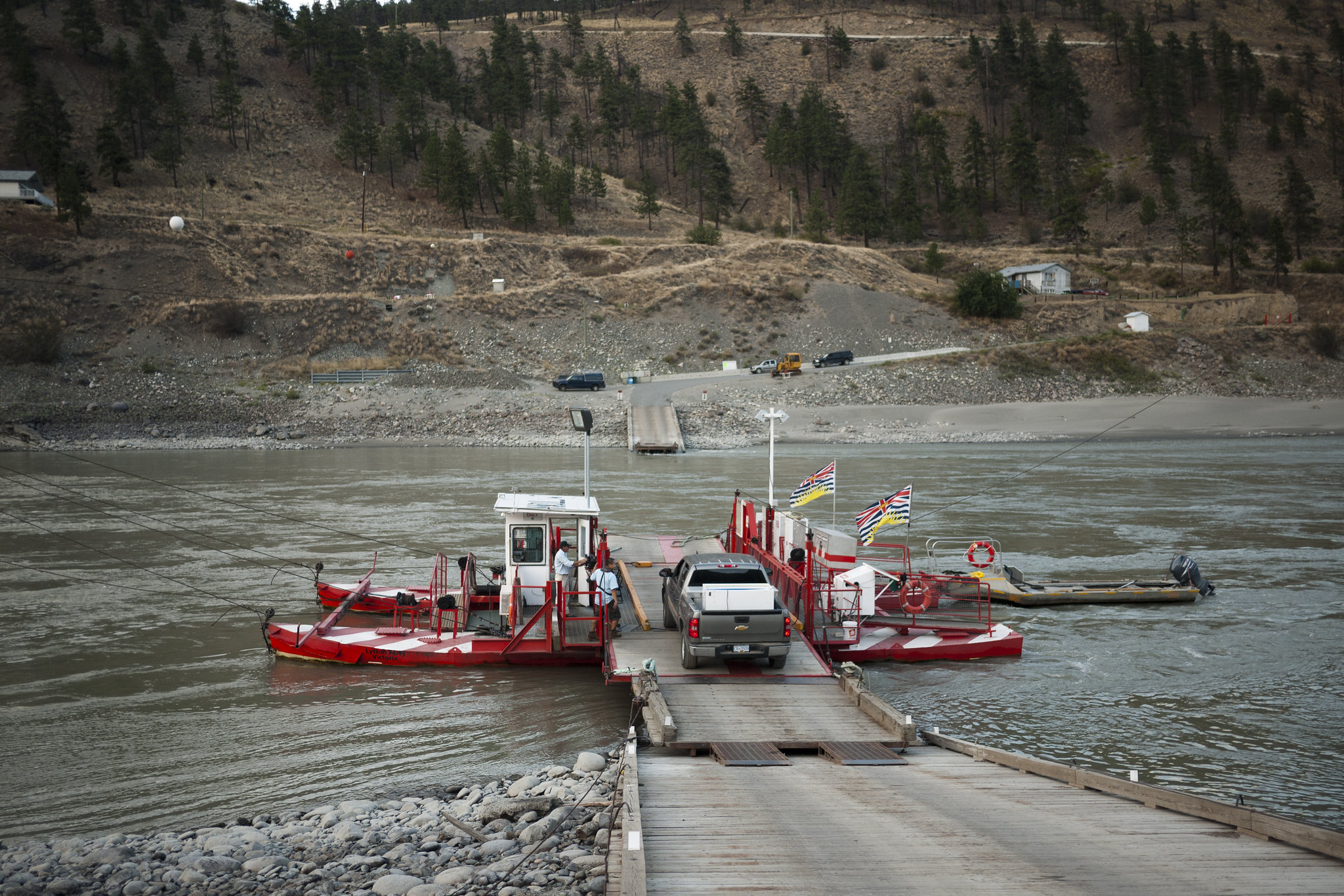 To cross back over the Fraser, Berel, the German cyclotourist, and I took the (motorless) reaction ferry. 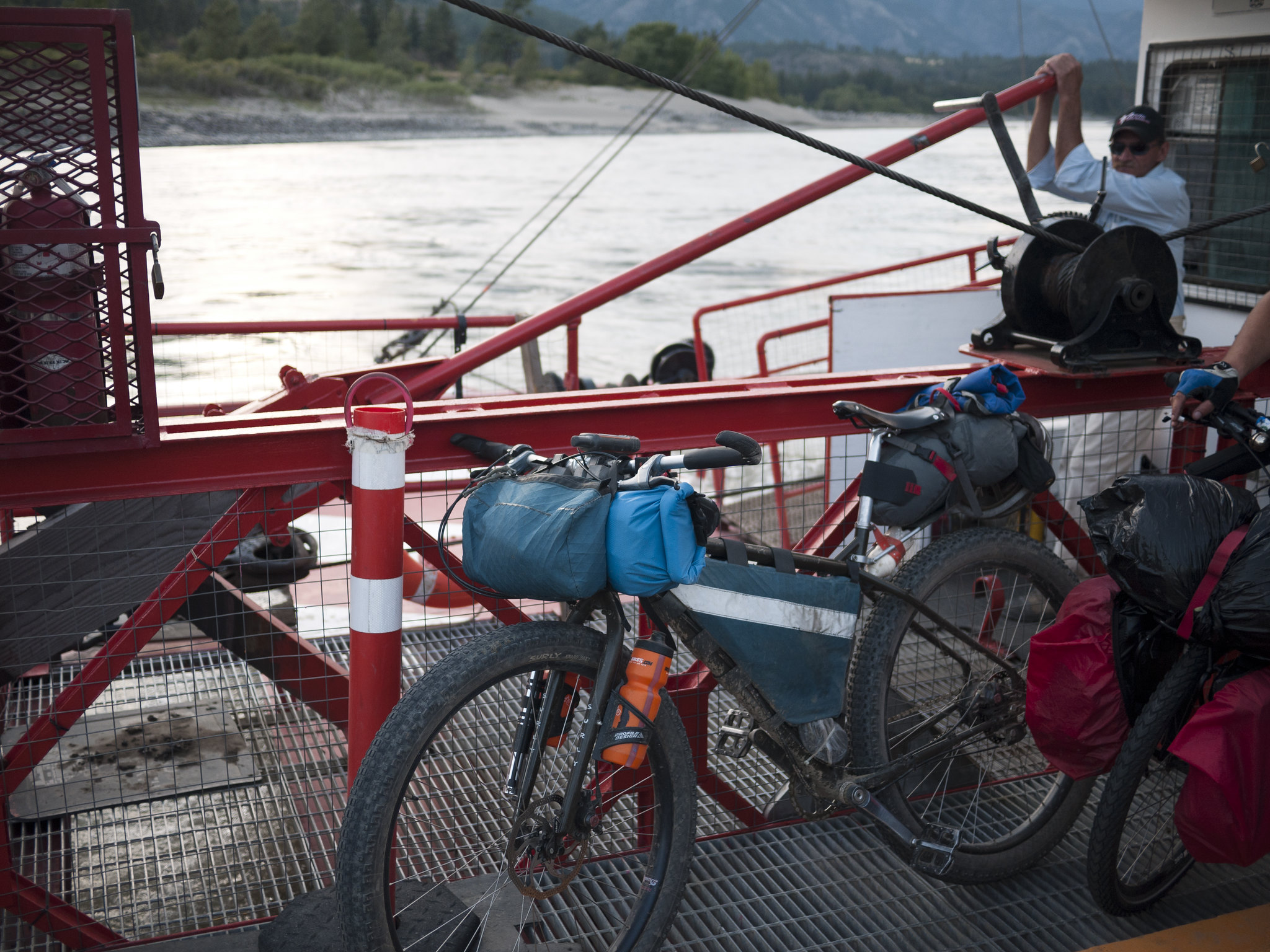 The captain dips the 4″x12″ slab of wood at the end of his lever into the current, which pulls the raft one way, and the current pushes the vessel along its cable-track. Simple. 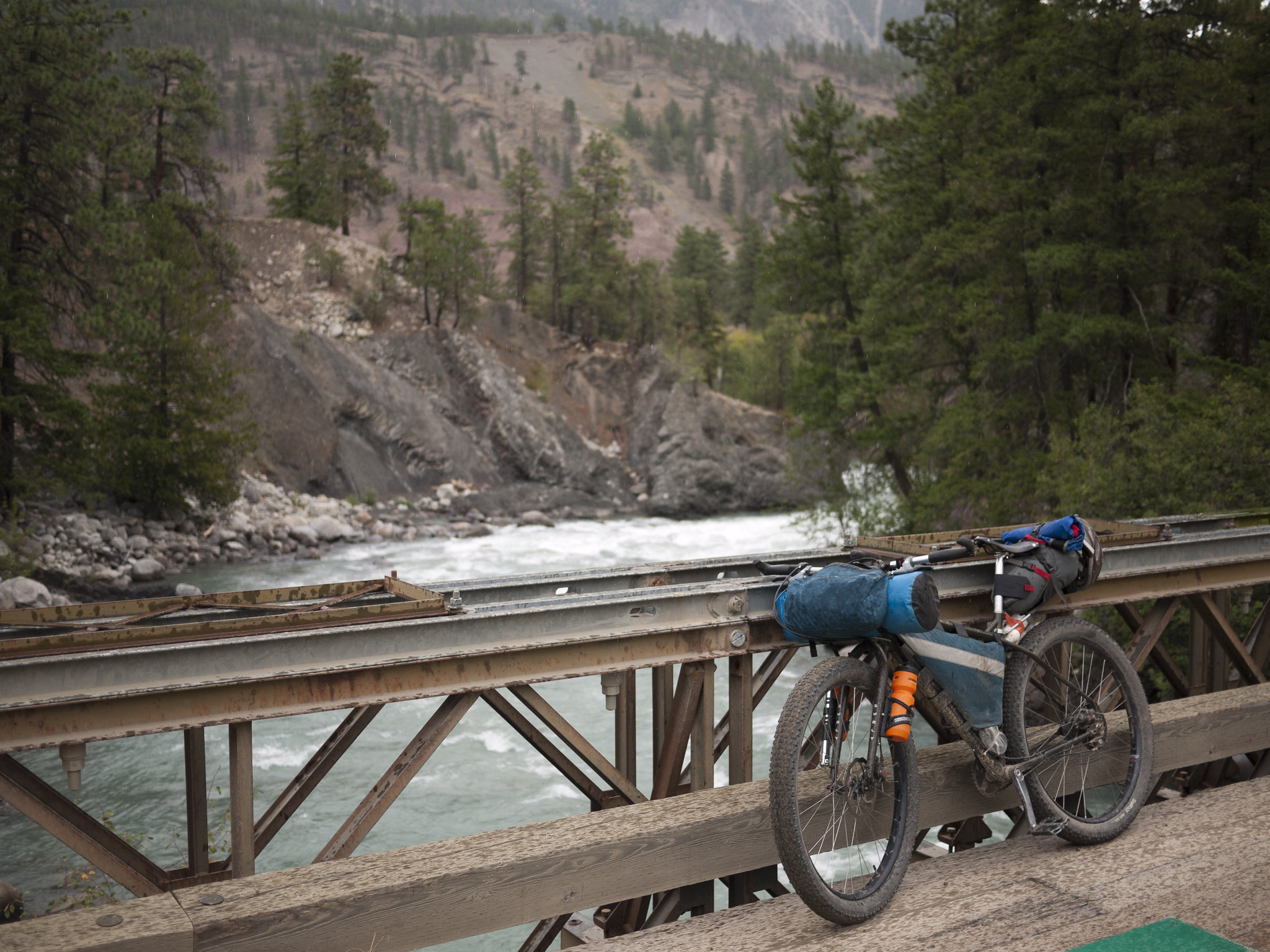 We found a camp spot near the Stein River. 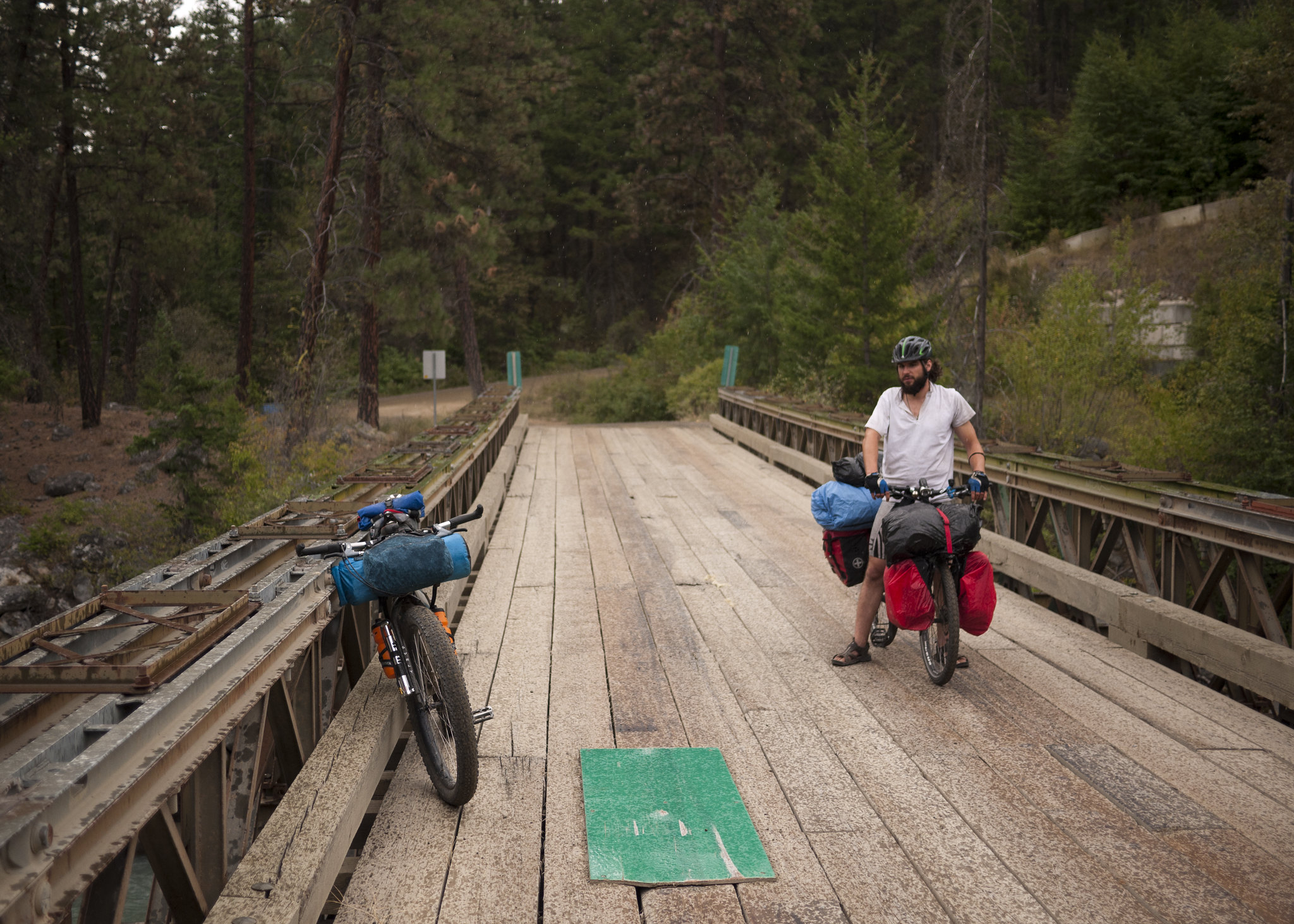 And, for better or for worst, I talk Berel into joining me on the dirt side of the river, rather than crossing back to the highway. 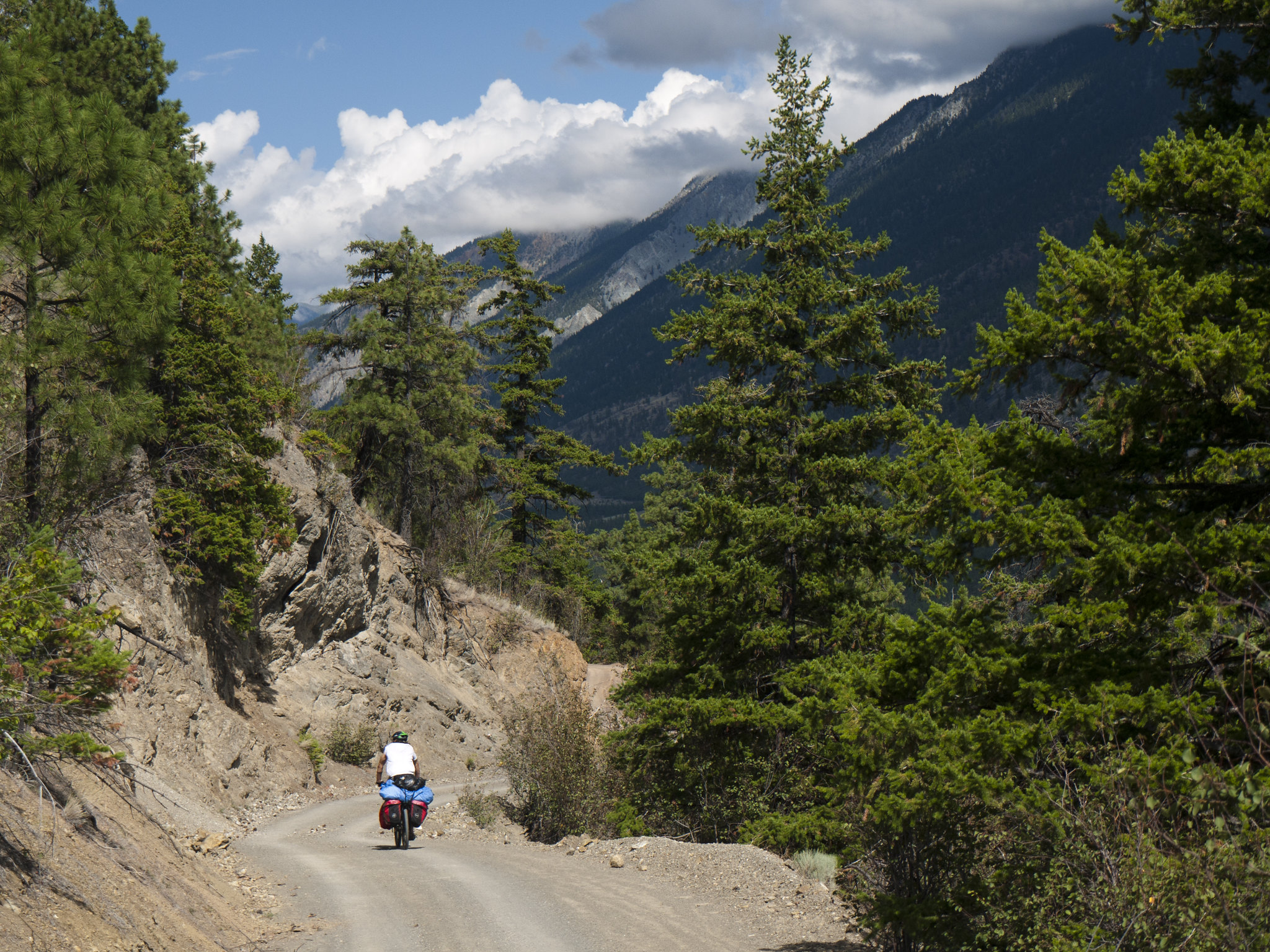 Though we follow the relatively flat river to Lillooet, it feels as if we spend the entire day climbing. We end up gaining a total of 1200m over the day, and Berel pays for his heavy load. Still, it’s worth it for the lack of cars and the joy of riding dirt. 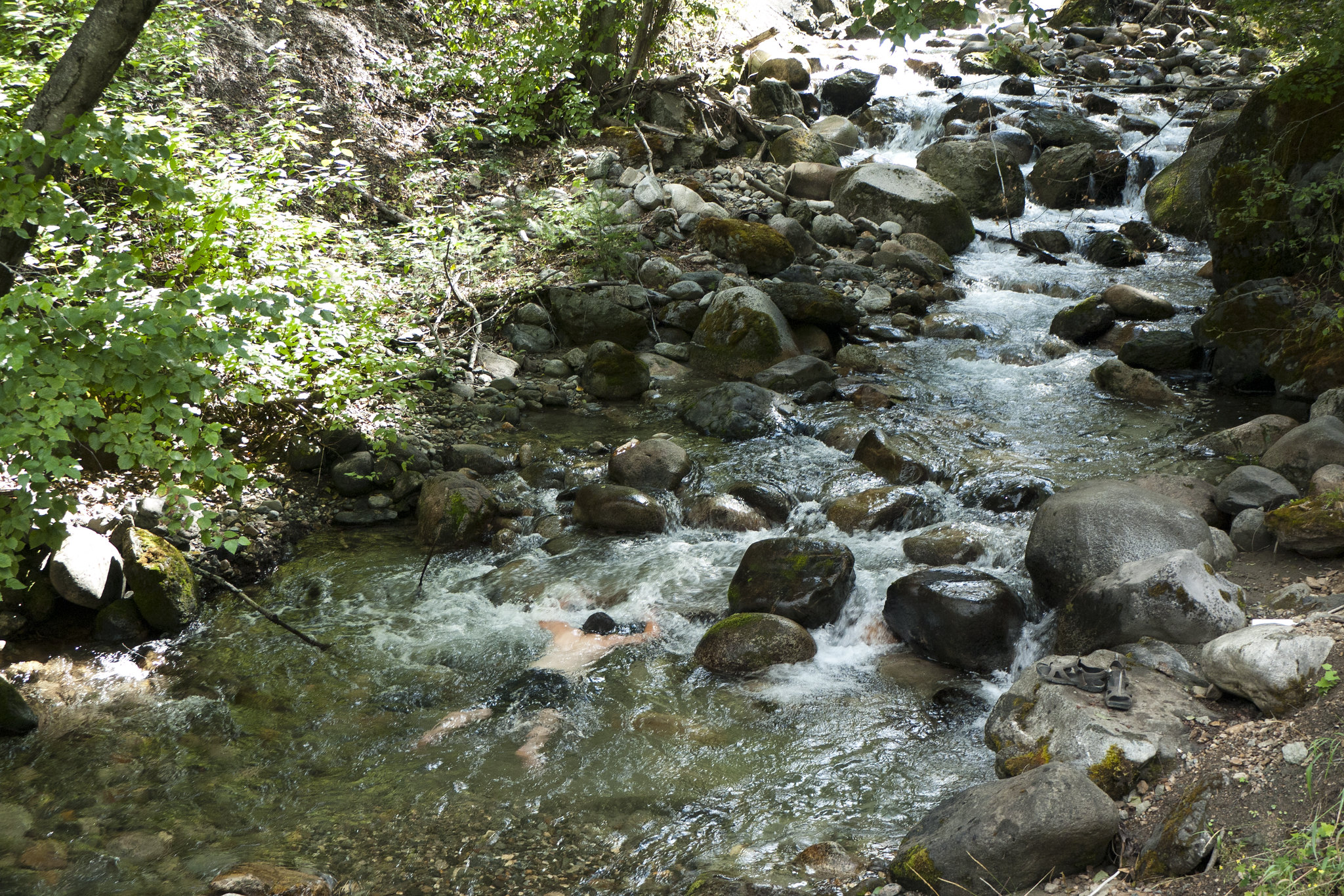 We took relief from the hot weather in Intapam Creek, and drink from many cold streams coming down the mountainside. 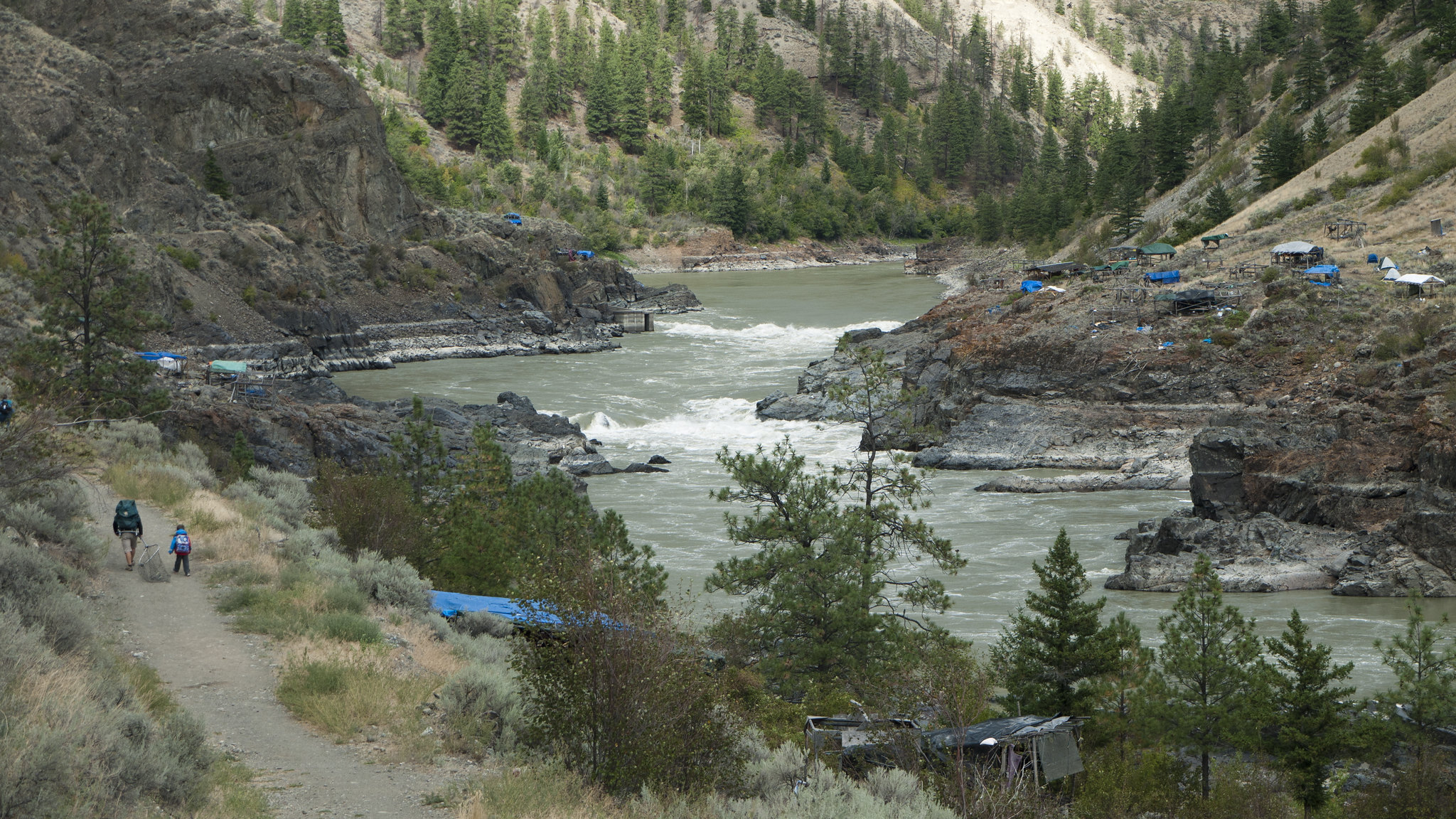 A sockeye salmon run was in full swing when I arrived in Lillooet. Here, at the Bridge River Rapids, a millenia-old tradition of wind-drying salmon caught in dip-nets from the adjacent rocks has people taking days off work to stock their larders. 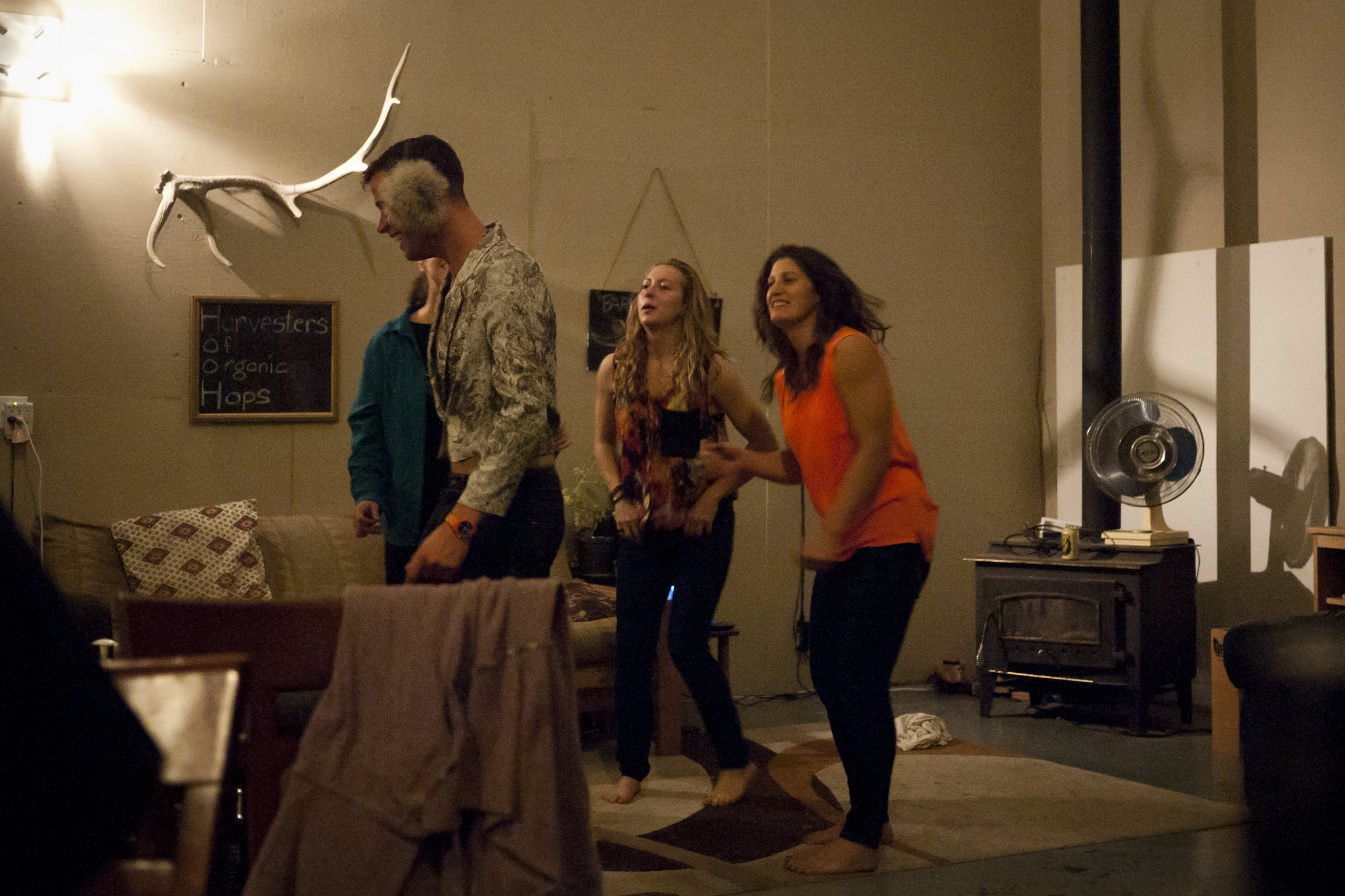 I found a good excuse for a rest day: old friends, growers of organic hops, good beer, a healthy dose of barbequed salmon, and an impromptu dance party.

Through my connections with the forest firefighters in Lillooet, I was able to deliver a box containing five days of food to Tyaughton Lake, two and a half days away, and leave it with the reception at Tyax Resort. This saved me a detour down to the poorly stocked store in Goldbridge. With a relatively light three-day load, I climbed from 230m above sea level, to about 2300m, crossing the Shulaps Range above the Yalakom River on a rough singletrack on my way to Tyaughton Lake. Unfortunately, this being outside of a protected area, dirt-bikes had found their way into the alpine and torn up what was meant to a smooth trail through expansive alpine meadows. My hiking to biking ratio was discouraging. The views were not. 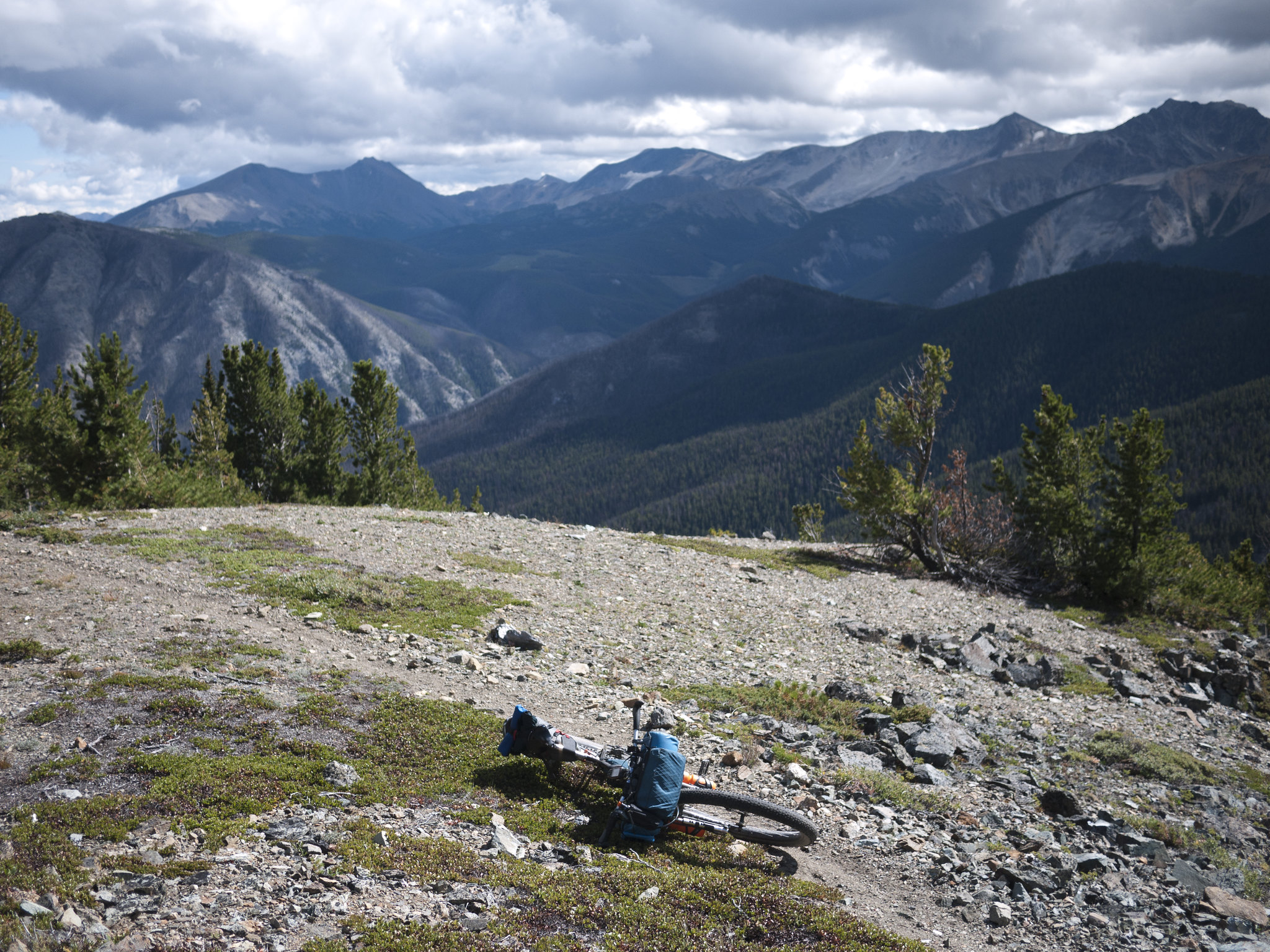 After many hours of pushing, I broke into the alpine of the Shulaps Range. 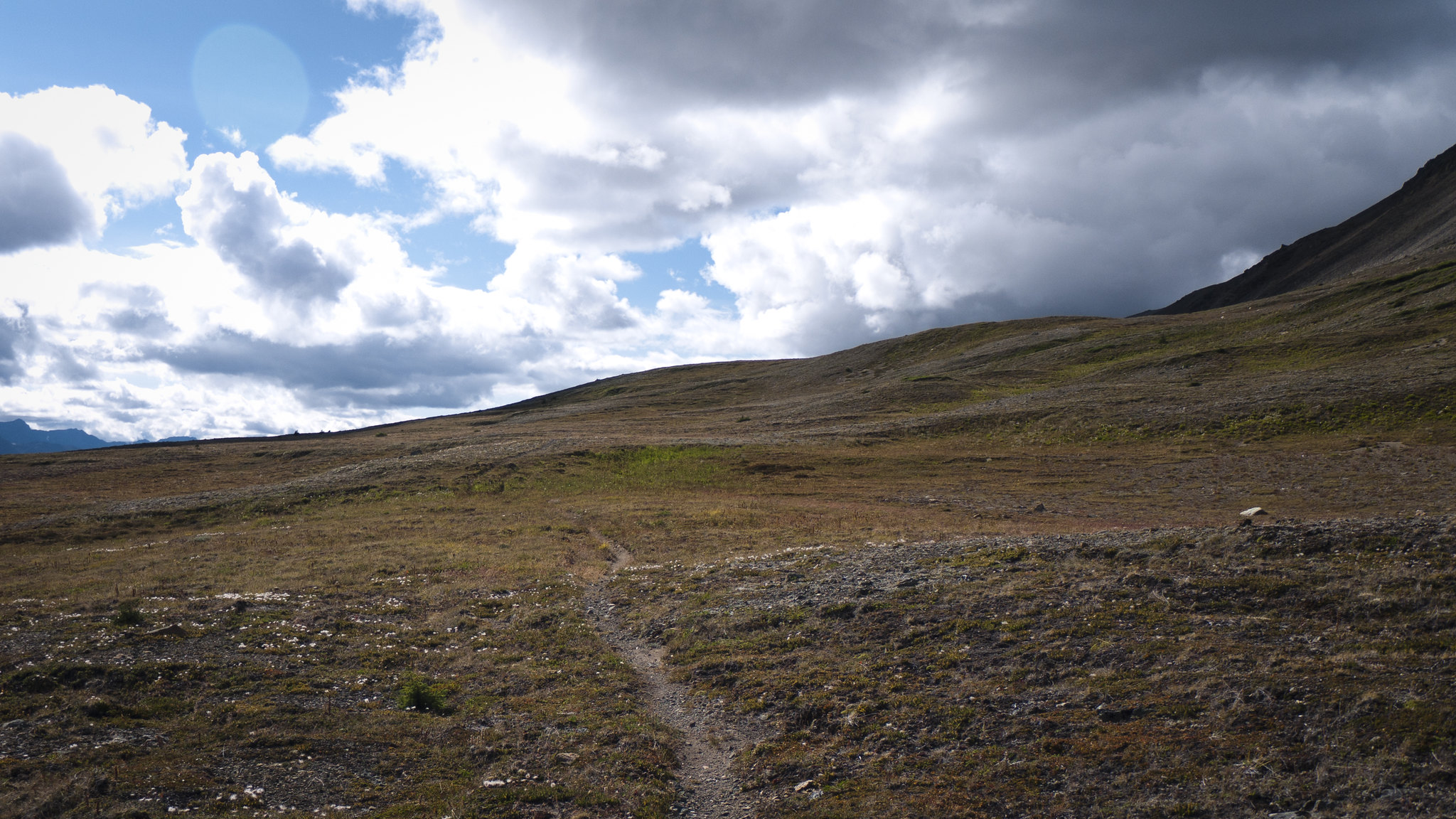 To find a vast, barren basin high above the valley floor. 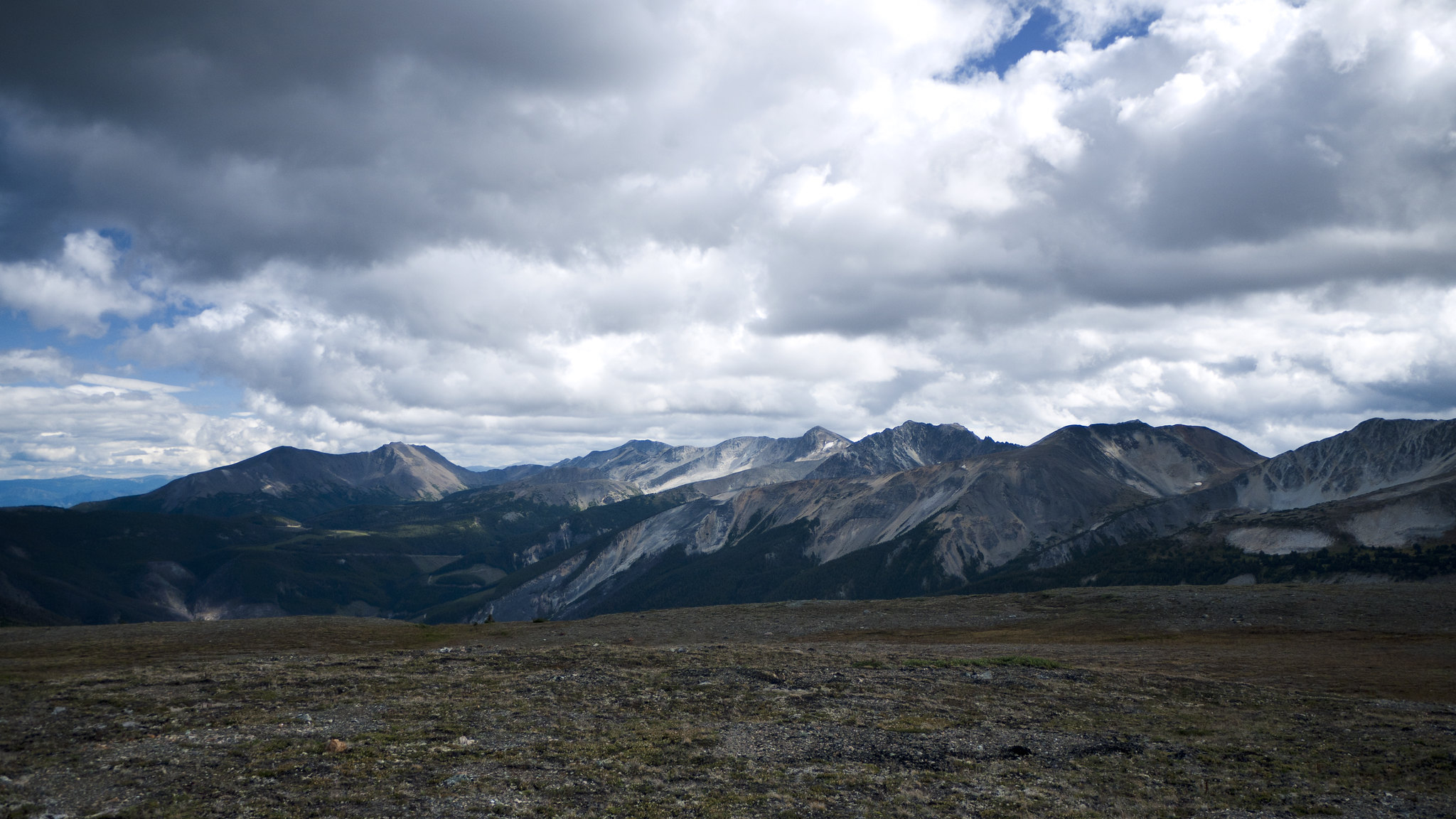 And a view of the ragged edge of the Coast Mountains. 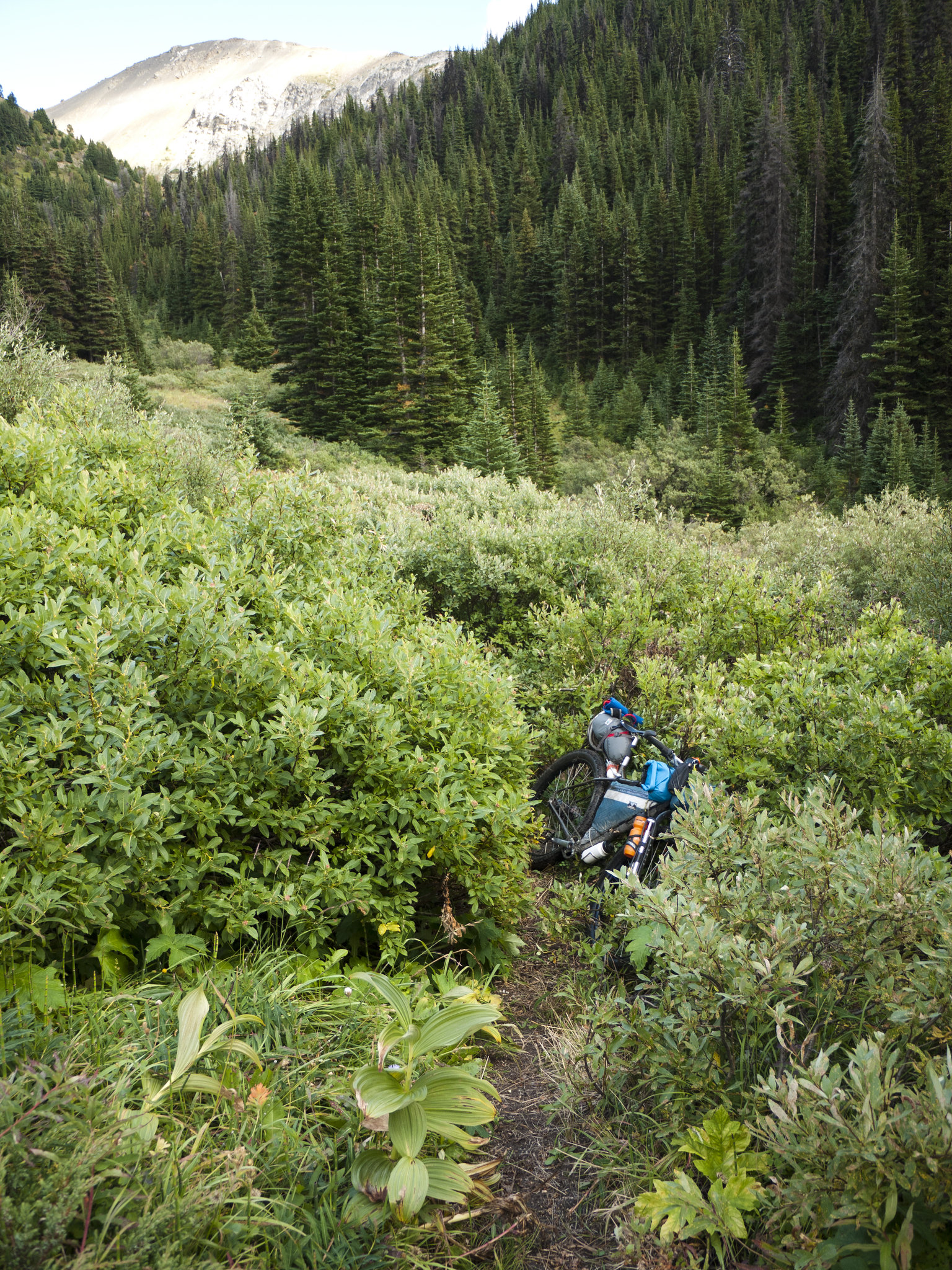 The Shulaps Basin Trail sees few visitors, and I ended up pushing through some brushed in sections on the downhill too. 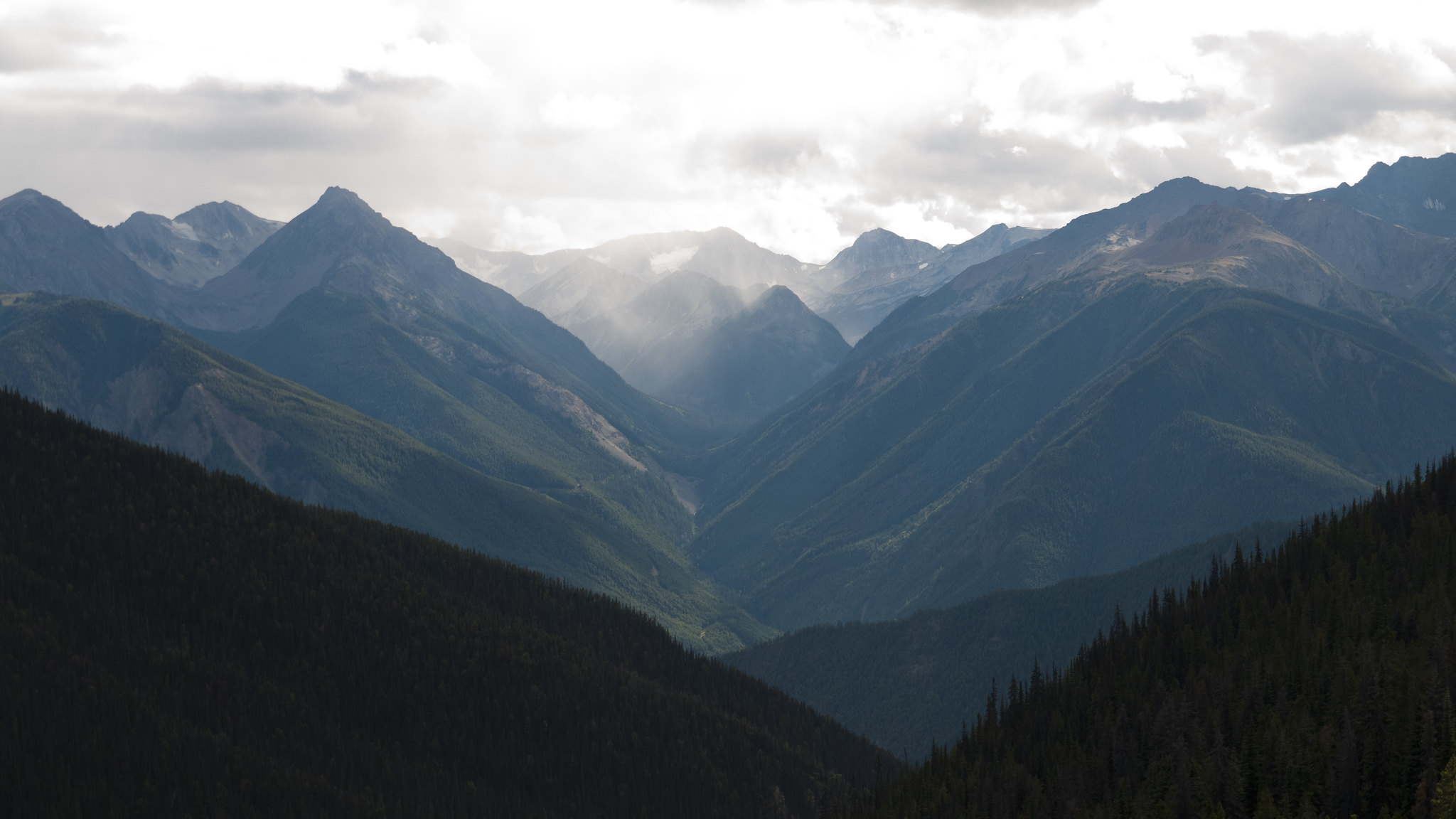 And it’s a long way down. 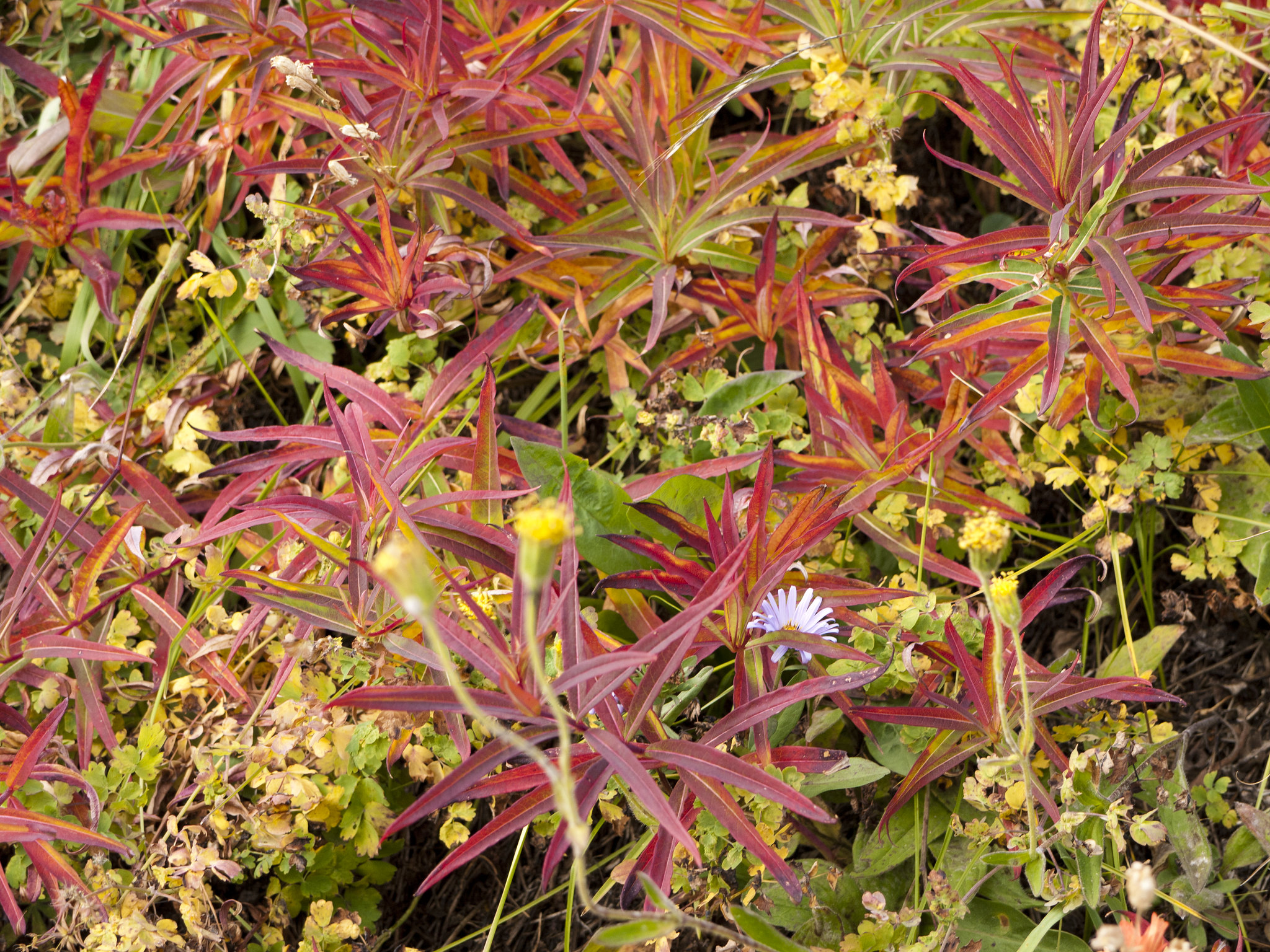 I retreated to the valley bottom in darkening weather. Already, the approaching autumnal chill is showing in the subalpine vegetation. 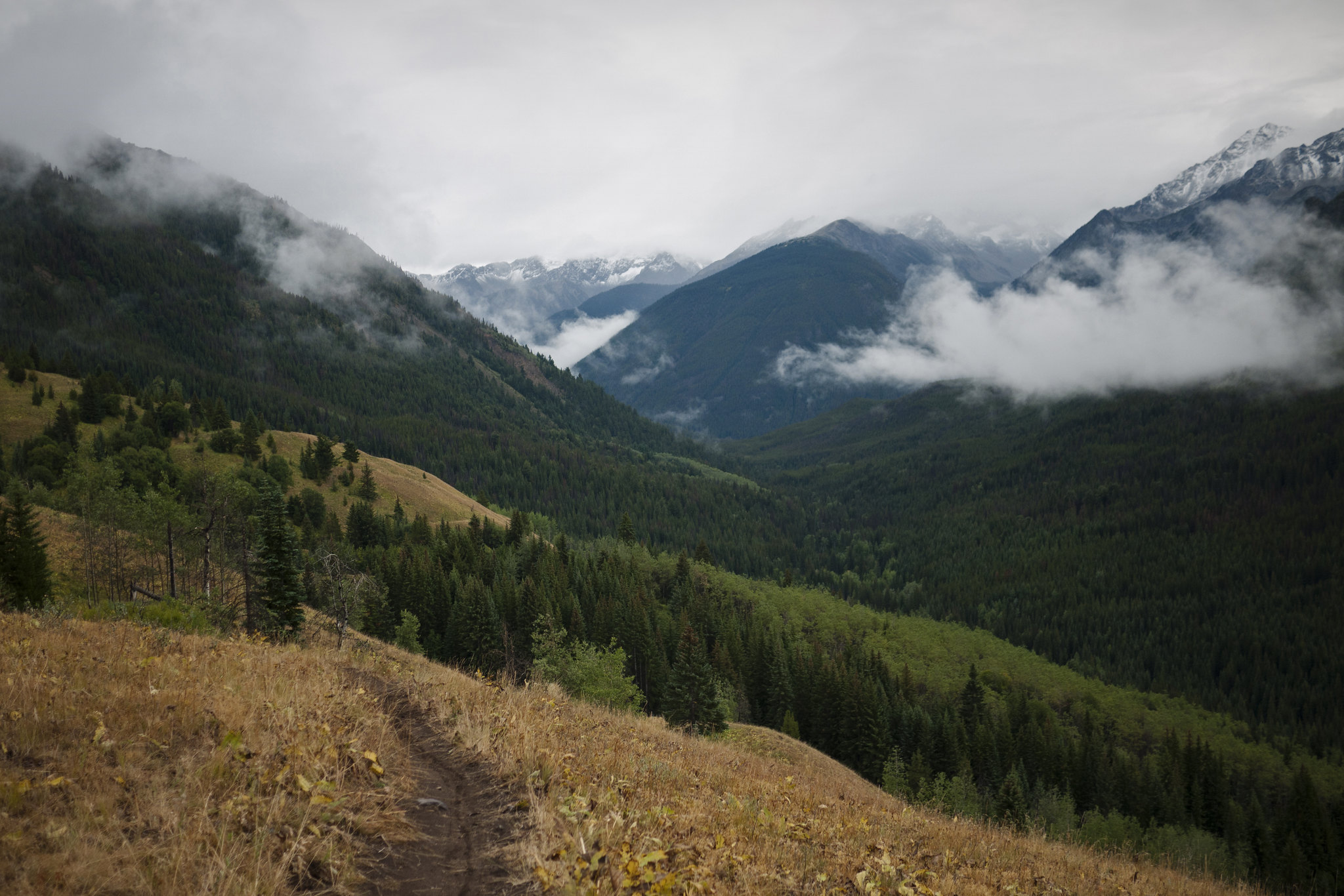 Eventually, it did rain. But not until after I’d resupplied and found my way onto the trails of the South Chilcotin Mountains Park. 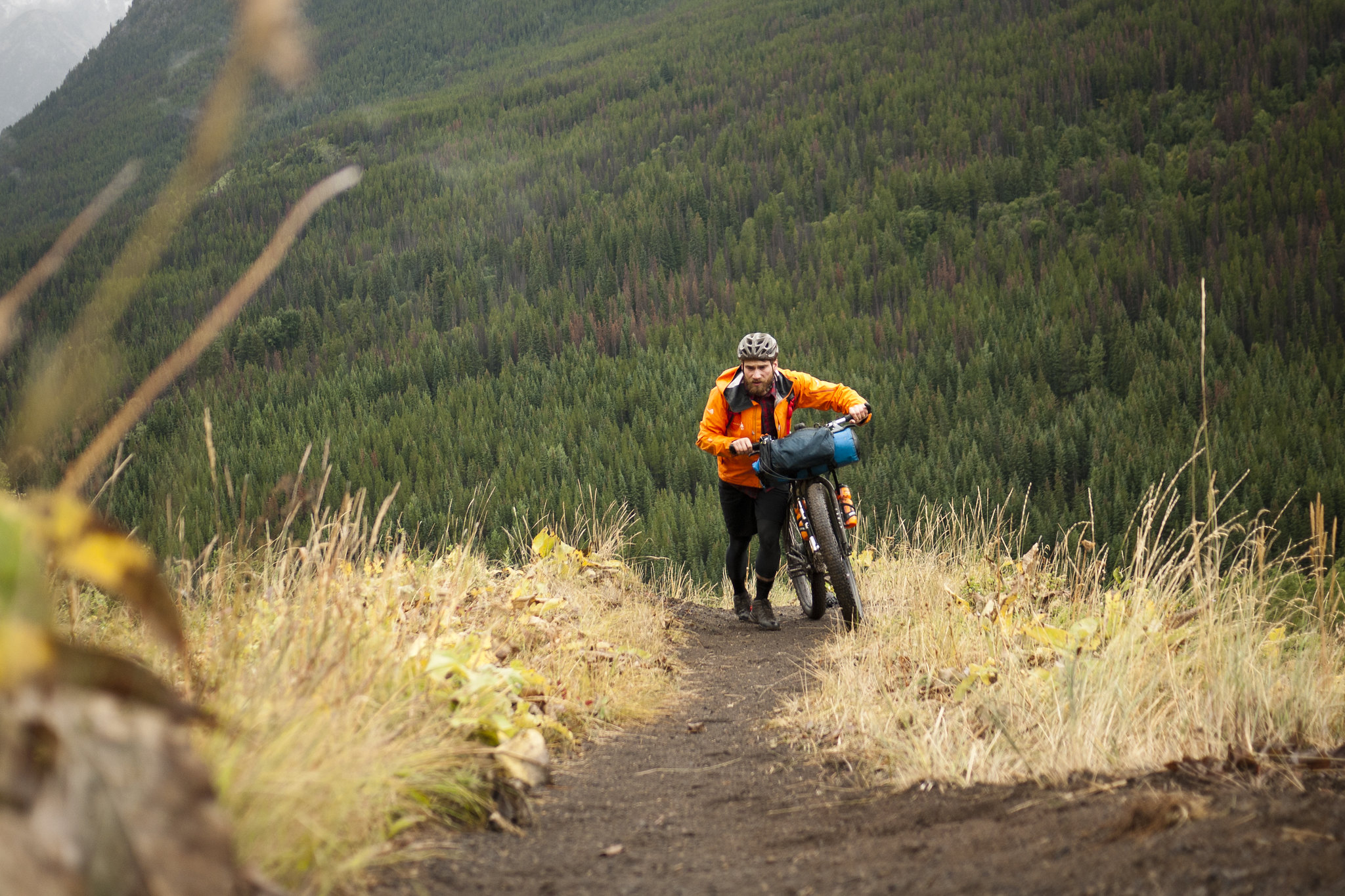 Cold and wet, I moved slowly. That is, when I wasn’t hiding under footbridges. 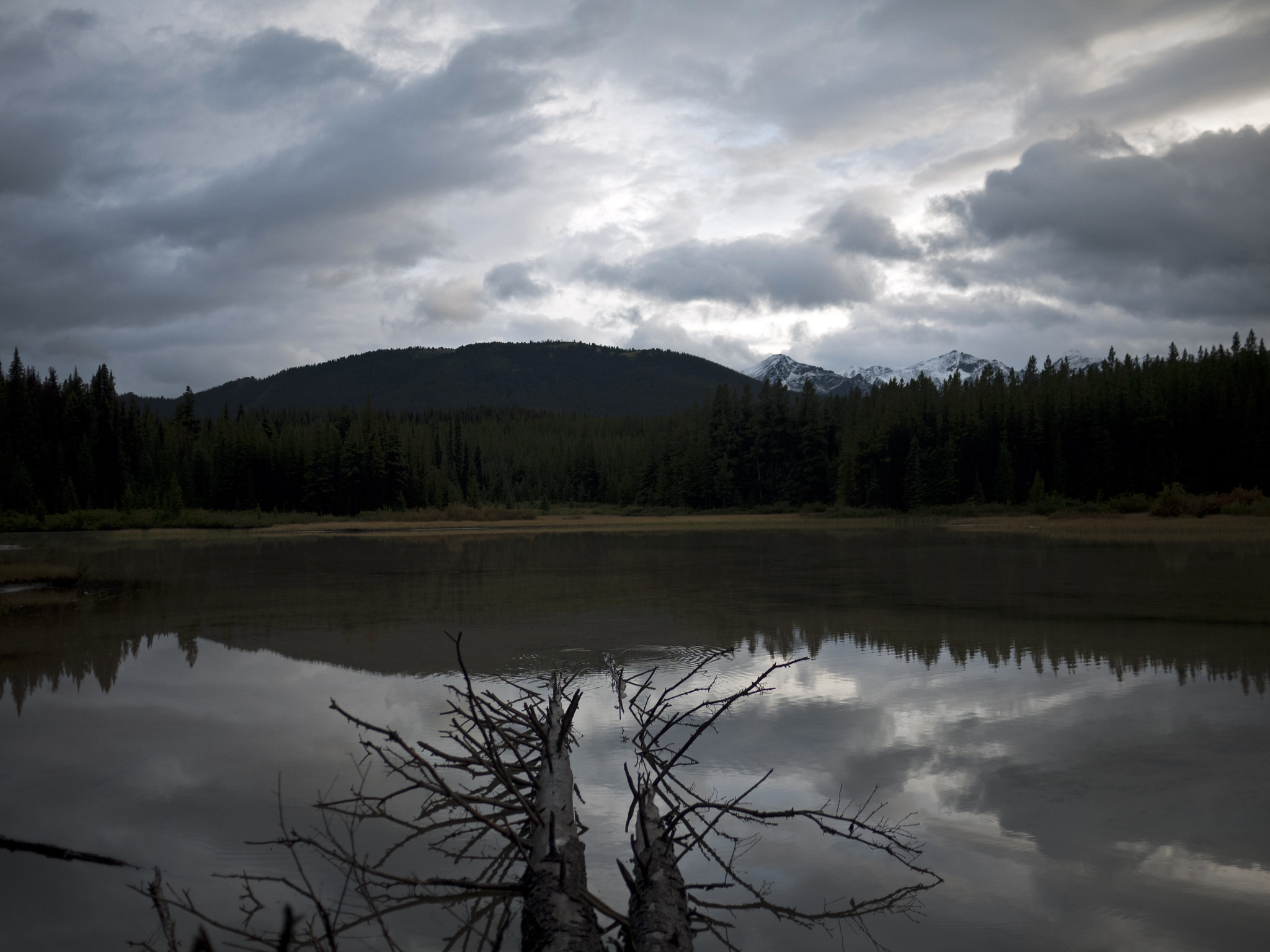 I ended my day early, making it only as far as Spruce Lake, where I built a roaring fire to keep me company and thaw my bones. Snow-covered peaks occasionally emerged from the clouds. 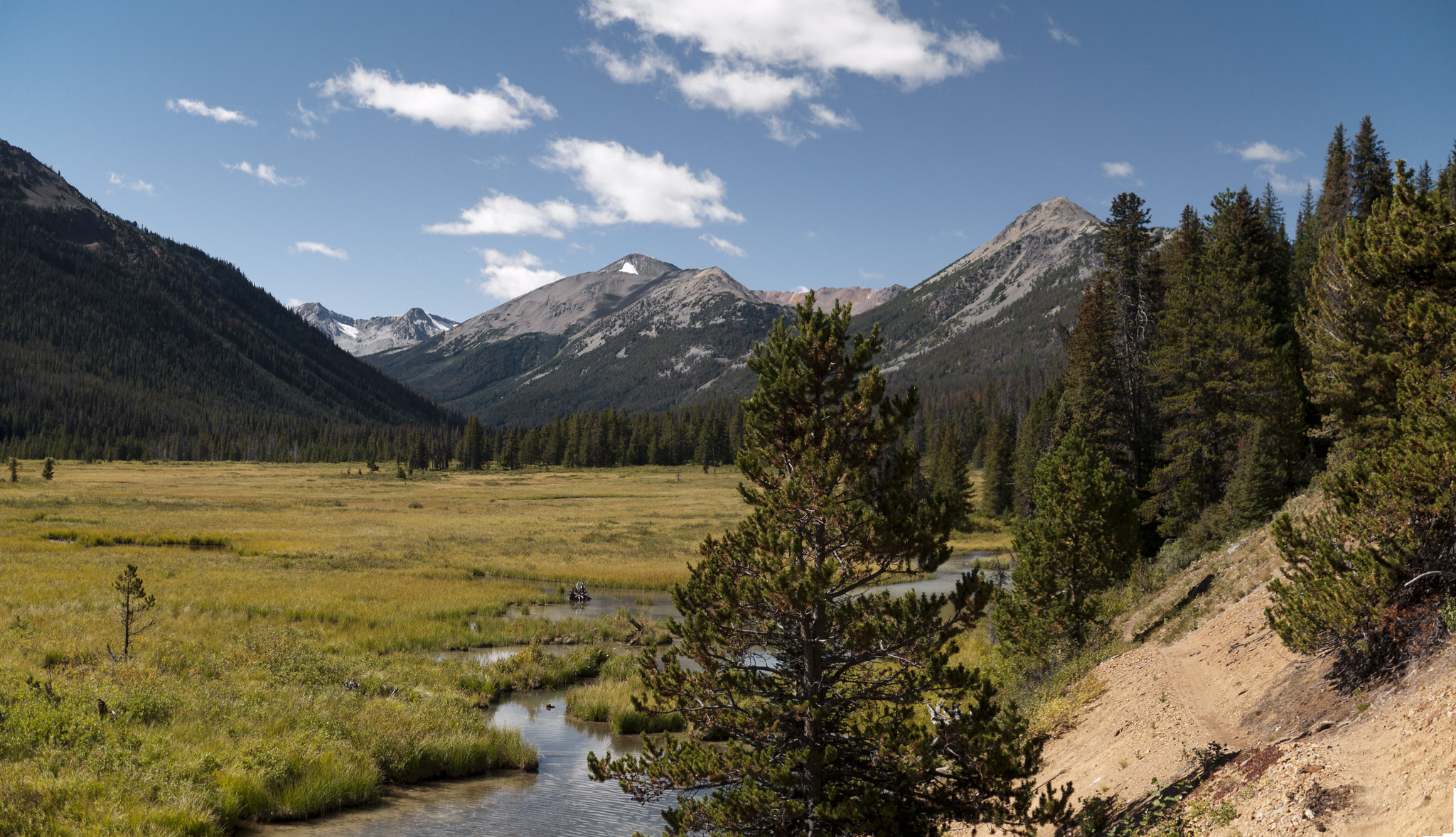 But the next day dawned bright. 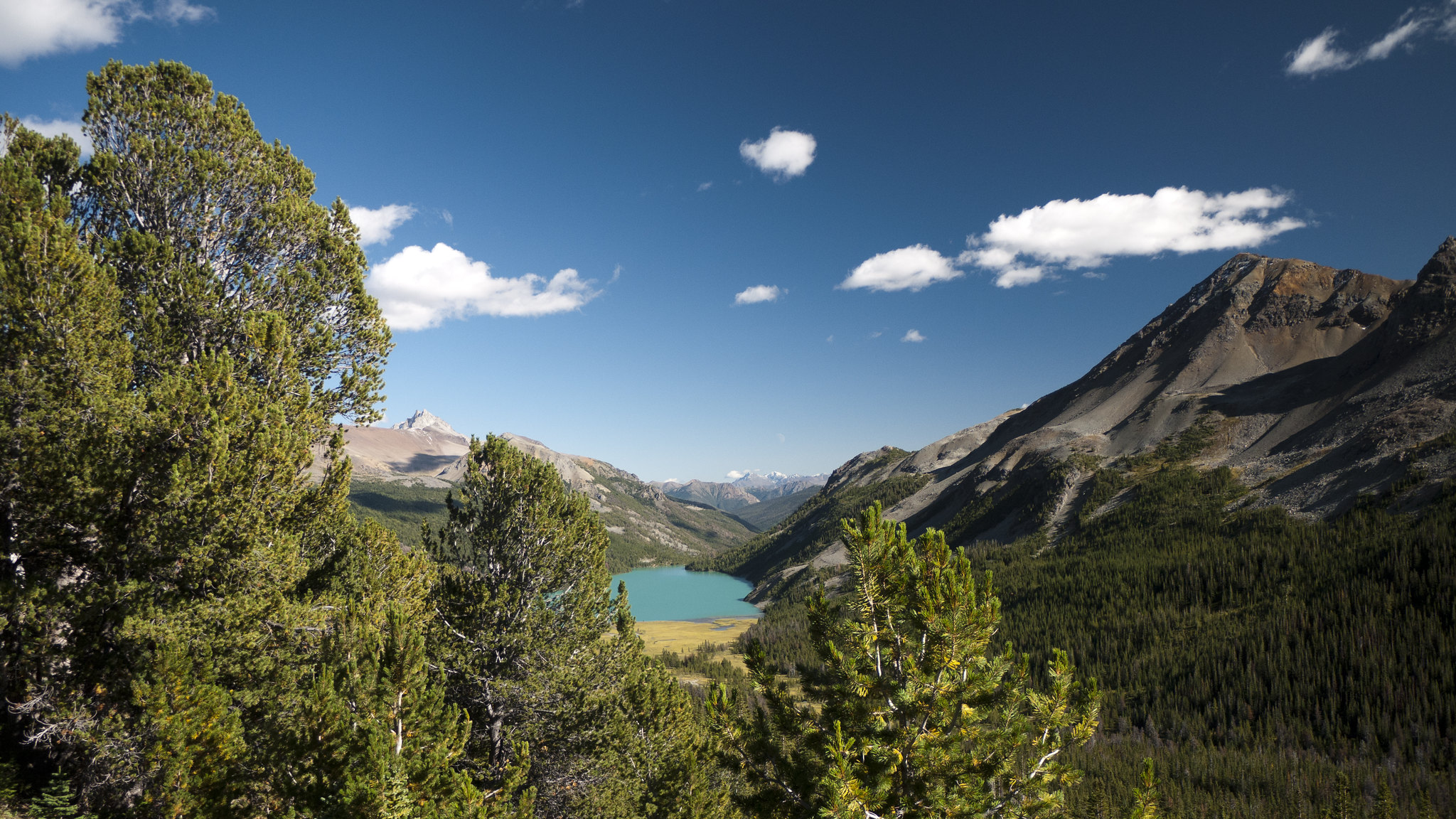 I wasted most of the morning drying out gear, and by the time I reached the alpine above Warner Lake the snow was all but melted off the trail.

I pushed up a loose trail with my pedals removed… 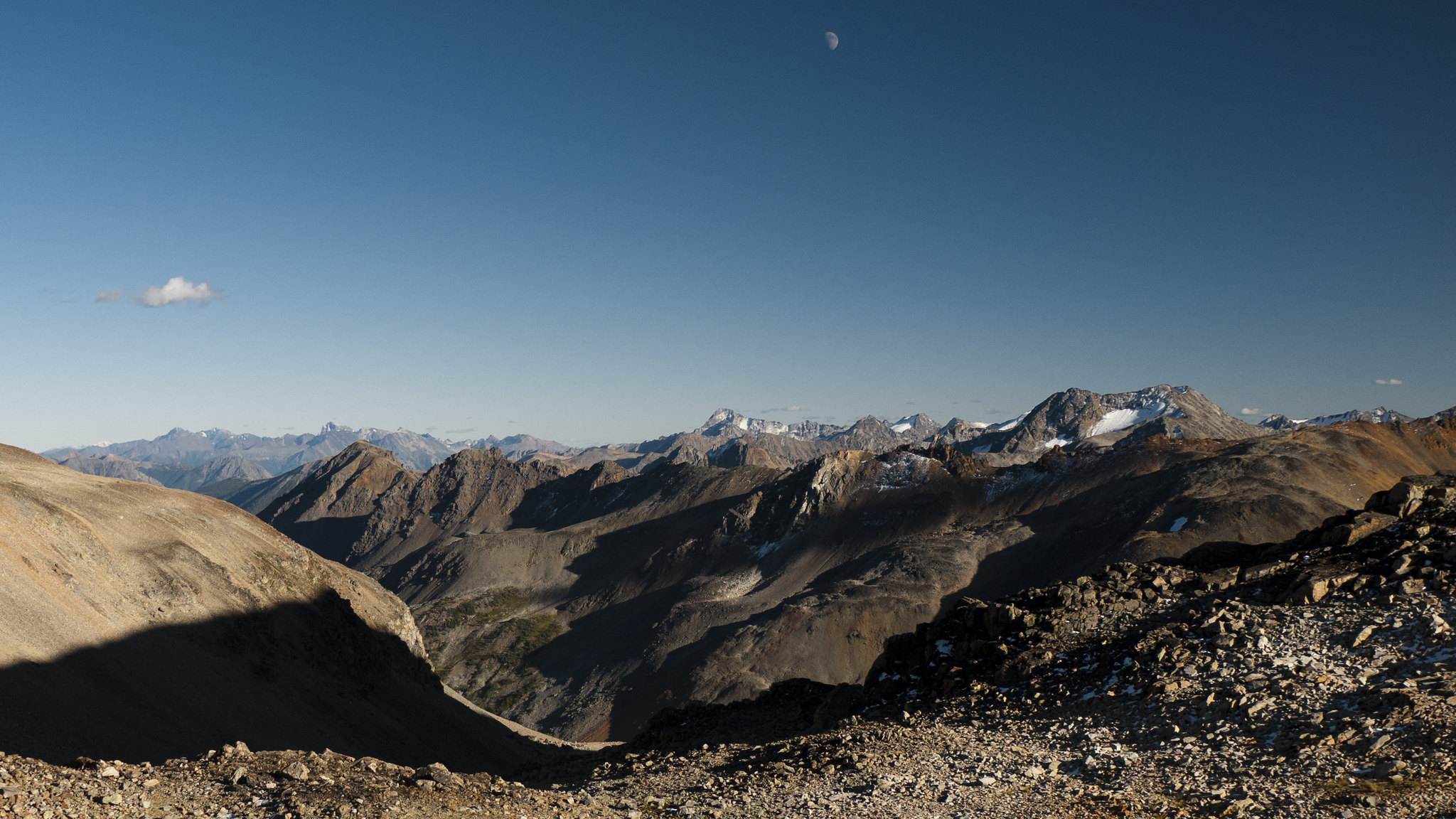 Until I stood at Warner Pass, the highest point of this route, and the edge of my mental map. Here, I would leave behind familiar areas and descend west into the unknown.

The top of a pass at five in the afternoon, far from the nearest maintained road, is an odd place to end a blog post. But, if I can assign a moment to the transformation from a ride driven by curiosity for something days away, to a quiet reverence of the rhythms of the trail, this was it. I’m not the first person to have ridden a bicycle on any part of this route. But, the feeling of discovery was real, and I doubt anyone has pedaled from so far.

Stay tuned for Part 2. You can sign up to receive email notifications when new posts are published on the home page.

We’ve also recently made an Off Route Facebook page, where we’ll be posting more frequent updates of where we are and what we’re up to, as well as lots of extra photos. You can “like” our page if you’d like to follow the adventure more closely.